Investors in bitcoin face a "realistic risk of total loss" and everyone but the most speculative should steer clear of cryptocurrencies, a senior staff member at the asset management arm of Deutsche Bank has warned.

"We do not recommend that. It’s only for investors who invest speculatively," Markus Mueller, Global Head of the Chief Investment Office at Deutsche Asset Management said in an interview with Bloomberg.

"There is a realistic risk of total loss."

Mueller went on to say that for bitcoin to considered a real, tradeable asset that Deutsche AM may include in its portfolio, huge strides are needed on "regulation, security and transparency," in the crypto world.

"Important issues such as liability and documentation are unclear," he said. "We are still at the very beginning."

"When security and trust are created, crypto-currencies can be assessed like established asset classes. It is possible that the governance required will exist in five to ten years from now," Mueller added.

Mainstream investors and institutions remain split on cryptocurrencies. Most see at least some scope for the blockchain technology underlying bitcoin to have real world applications, but many institutions see bitcoin itself (as well as other cryptocurrencies) as worthless exercises in speculation, not worth the distributed ledger they’re printed on.

Late in 2017, for example, Paul Donovan,  the global chief economist at UBS’s wealth management arm, tore into the argument that cryptocurrencies could eventually replace fiat currencies like the pound and the dollar.

"The problem that cryptocurrencies face is that they fail the two key metrics of what makes a currency a currency," Donovan said. "A currency has to be a widely used medium of exchange. Cryptocurrencies are never going to achieve that. Period."

Mueller’s assertion that Deutsche AM will steer of the crypto space for the foreseeable future comes after analysts at boutique research house Bernstein said similar.

"Cryptocurrencies and underlying blockchains seem set to grow and become a disruptive force. Thus they will have significant implications for investors. But, for now at least, they do not have a direct role in asset allocation," a note from a Bernstein team led by Inigo Fraser-Jenkins circulated last week said.

from SAI http://read.bi/2FsaMbg
via IFTTT

Okay, so instead of a prestigious award they got a puppy.

At the Grammys on Sunday, host James Corden didn’t just dish out those little golden gramophones. “Consolation puppies” were handed out to nominees who didn’t win their category.

Jerry Seinfeld (who was nominated for Best Comedy Album) was given a puppy called Roxy and Corden described her as “a biter”.

Many were happy to see the pups at the event.

One of consolation puppies just got walked past me so the night is pretty much downhill from here. #GRAMMYs

I’m pretty sure “consolation puppies” should be mandatory for all disappointing situations in life. #Grammys

But not everyone was so thrilled about living dogs being handed out as prizes.

Not only the sheer stupidity of giving out puppies at the #GRAMMYs but PUG puppies with potential #BOAS breathing problems.

Mashable reached out Grammys to find out where the puppies were sourced and what happened to them after the ceremony but they were unavailable for comment. We will update the story accordingly when we receive a response.

from Mashable! http://on.mash.to/2DKqcXY
via IFTTT

Welcome back to Monday. If you’ve been waiting to hear more on Samsung’s next Galaxy flagship, we’ve got you covered. As well as everything else that happened over the weekend, naturally. Like Elon Musk with a flamethrower. 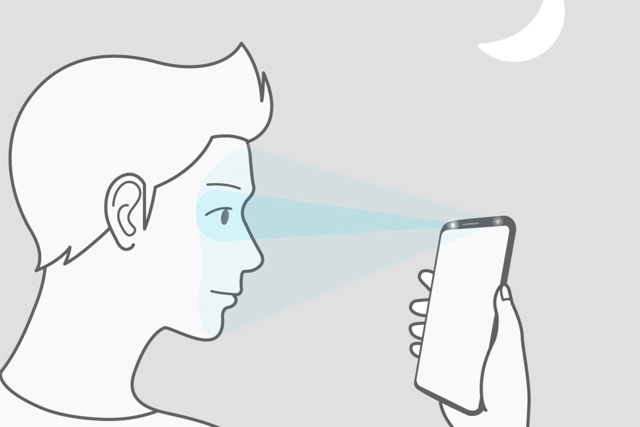 Samsung has hinted that the Galaxy S9 might include more advanced face recognition, but we’re now getting clues of what’s involved. Deep inside the Galaxy Note 8’s Oreo beta software, there’s a hidden Intelligent Scan feature that uses both camera-based face detection and the iris scanner for "better accuracy and security" and improved results in "low or very bright" lighting. Given that the iris scanning on the S8 and Note 8 can be finnicky (and that’s us being kind), this could deliver a much more consistent experience when unlocking your phone. We’re still not entirely sure how: A video included suggests that both the iris scanner and camera are active at the same time, regardless of lighting conditions, but we’d still like to hear more on the finer details. And does Samsung have its own Animoji in the works? Galaxy-moji? Samsung smileys? The world must know.

You might want to buy a fire extinguisher while you’re at it.
Elon Musk’s Boring Company is selling a flamethrower 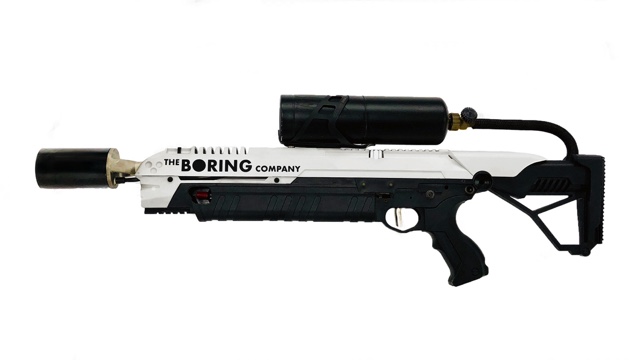 After weeks of teases, Elon Musk has revealed The Boring Company’s latest product: a flamethrower. That’s right, the same company digging traffic-skipping tunnels is now offering something that might be better used against any aggressive aliens SpaceX comes across. Plunk down $500 for a pre-order (there’s no word on when it will ship), and you can have the "world’s safest" fire-breathing weapon. Just in case it isn’t safe enough, though, there’s also a $30 branded fire extinguisher. Musk had teased for a while that he would sell a flamethrower when Boring Company hats sold out.

Location data in fitness apps is frequently a good thing since it helps you remember and optimize your routes. However, it’s also created an unexpected security risk, revealing secret military bases. UCA analyst Nathan Ruser has discovered that Strava’s publicly available activity map includes the fitness routes of soldiers and agents in sensitive locations, including American bases in Afghanistan and Syria, the UK’s Mount Pleasant airbase in the Falkland Islands, a suspected CIA base in Somalia and even Area 51.

THOUSANDS OF DOLLARS!
ATM jackpotting hacks reach the US 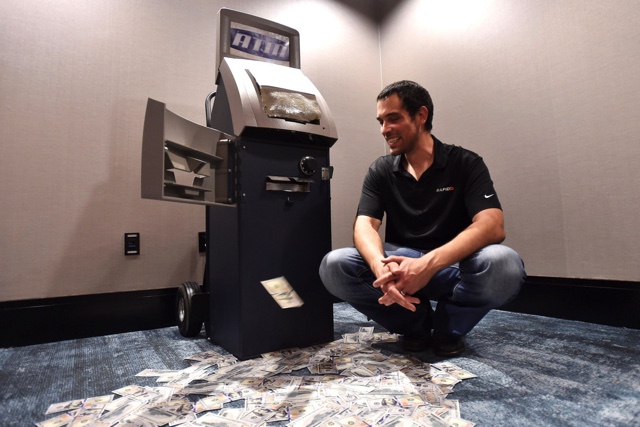 For some ATM thieves, swiping card data involves too much patience — they’d rather just take the money and run. The US Secret Service has warned ATM makers Diebold Nixdorf and NCR that jackpotting hacks, where crooks force machines to cough up large sums of cash, have reached the US after years of creating problems in Asia, Europe and Mexico. The attacks have focused largely on Diebold’s front-loading Opteva ATMs in stand-alone locations, such as retail stores and drive-thrus, and have relied on a combination of malware and hardware to pull off heists.

from Engadget http://engt.co/2DZccwS
via IFTTT

With 11.7 million Instagram fans, 24-year-old fitness influencer and blogger Jennifer Selter from Long Island has amassed a huge social media following and was recently named the second most influential fitness star in the world by Forbes.

She has her own blog which offers health and fitness tips and also recently launched an athleisure collaboration.

Alongside snaps of her workouts, Selter is known for sharing bikini-clad photos of her rear, which has earned her the title "belfie queen" by some fans.

Just "#Seltering" in Venice 🤷🏻‍♀️ Throwback to this pose, gotta post one up every once in awhile

But it appears she was not able to use her influence to diffuse a hostile situation aboard a New York-bound American Airlines plane while travelling with her sister at the weekend, upon which a big argument with cabin crew erupted.

On Saturday, Selter shared a video on Twitter which appears to show a row between her and members of cabin crew after she got out of her seat on board the plane bound for her hometown of New York.

In the video, Selter says the plane has been sat on the tarmac for over two hours. She has since said that she only stood up to stretch and put her jacket away.

In the footage a fellow passenger interjects and appears to try and defend the Instagram star to airline staff.

Things escalate, though, as Selter then posted a video showing police officers aboard the plane, who appear to have come to remove her.

"Just like that, 5 cops coming at me. Worst experience American Air," she captioned the post. One of the officers can be heard saying: "American Airlines calls the shots. They don’t want you to fly on their plane today."

Just like that, 5 cops coming at me. Worst experience American Air ✌🏼 pic.twitter.com/1LY1NrAQ3k

She shared a video having left the plane, captioned: "I did nothing wrong but got kicked off the plane."

I did nothing wrong but got kicked off the plane. pic.twitter.com/XE2Q35dghm

Selter posted another video of a passenger, who she says also left the aircraft following the blogger’s mistreatment by cabin crew.

"Here is a video of an innocent passenger who on her own decided to get off the plane based on how badly @AmericanAir treated us all," she said.

Here is a video of an innocent passenger who on her own decided to get off the plane based on how badly @AmericanAir treated us all. pic.twitter.com/DZ4kkHOlox

According to Page Six, Selter said of the experience: "It was humiliating. They made me feel like a terrible person, and I did nothing wrong."

"I will never ever fly American Airlines again," she added. "I’ve seen cops come onto flights. But they shouldn’t kick people off unless something is actually dangerous."

When contacted by Business Insider for comment, American Airlines said in an emailed statement:

"Ms. Selter was asked to leave the aircraft after a disagreement occurred Saturday night at Miami International Airport (MIA). American offered her hotel accommodations and transportation, which she declined. She flew on American Sunday morning back to New York (LGA) – arriving around 8:30 a.m. ET yesterday morning."

SEE ALSO: Fitness influencers, trainers, and models show us what’s inside their fridges — and reveal why you should avoid ‘fat-free’ foods and ‘cheat days’

from SAI http://read.bi/2DMUd9P
via IFTTT

It’s a new year (and a new you? Maybe?) and we’re all trying to clean up our acts. For the first episode of the Upgrade’s second season, we’re taking a closer look at alcohol—why we drink, what it does to us, and how to quit, if we’re so inclined. We’re joined by author Annie Grace, author of the book This Naked Mind: Control Alcohol, Find Freedom, Discover Happiness, &amp; Change Your Life.

Listen to The Upgrade above or find us in all the usual places where podcasts are served, including Apple Podcasts, Google Play, Spotify, iHeartRadio, Stitcher, and NPR One. Please subscribe, rate, and review!

Discussed in This Episode

Upgrade of the Week

Every week we like to let you in on the upgrades we’ve made in our own lives. This week we talked about keeping our heads up, looking in the right direction, and retreating (for a minute).

Maybe you have a question for us. Maybe you just want to say hi. Whatever it is, we’re here for you:

2. Email your question/comment to upgrade@lifehacker.com.

We look forward to hearing from you!

from Lifehacker http://bit.ly/2BDlmtY
via IFTTT