The BCA Float 2.0 avalanche airbag system is lighter and more useful than previous versions. We carried it in the BCA Float 27 Speed pack during an avalanche course for this review. 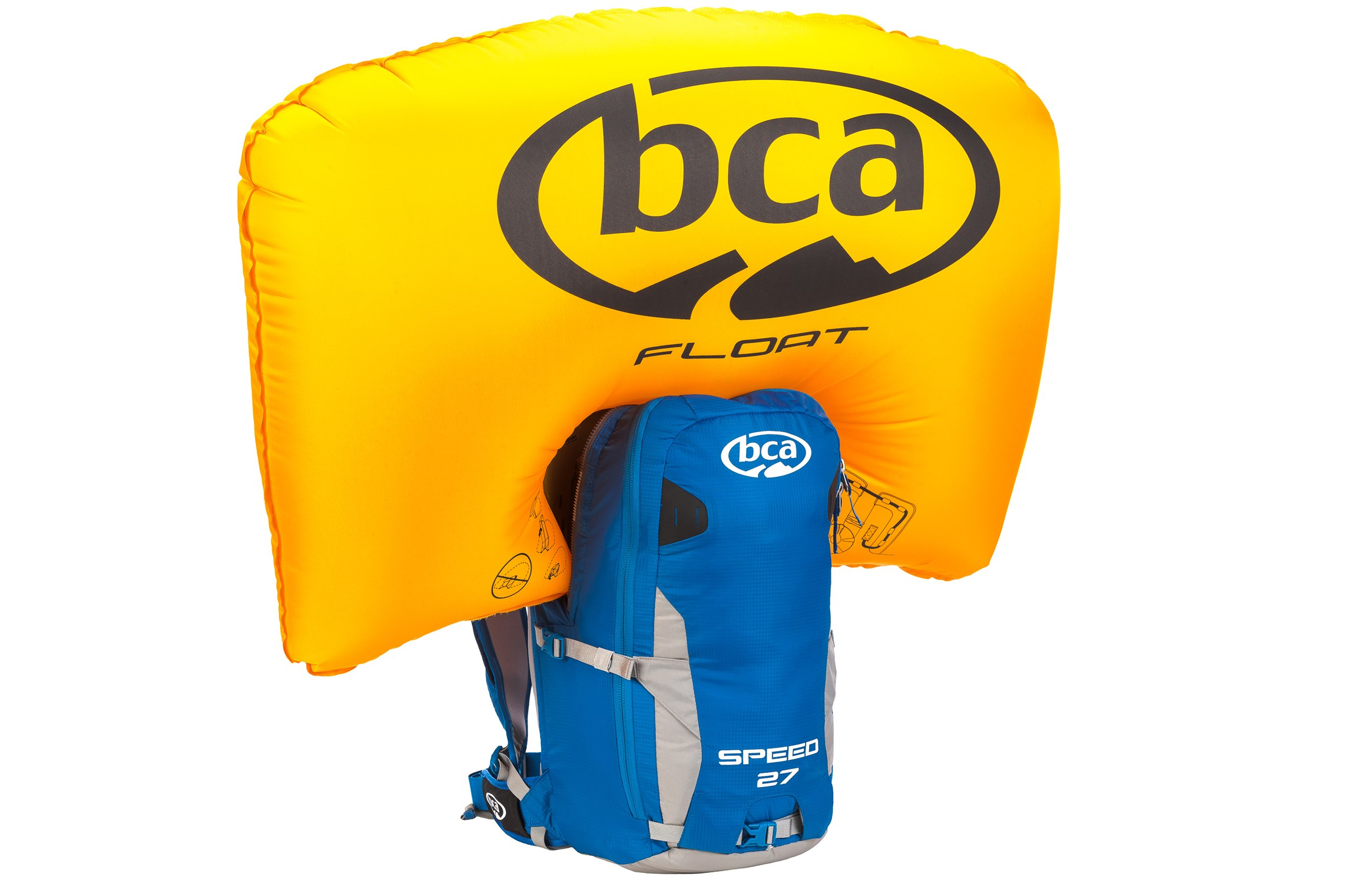 Backcountry Access (BCA) released its new Float 2.0 system for the current winter season and put it in their Float 17 Speed and Float 27 Speed models. We tested the Float 27 Speed Avalanche Airbag during a three-day avalanche safety and rescue course in the North Cascades.

The Float 2.0 system is 30 percent smaller and weighs 15 percent less than its proven predecessor. These improvements combine with a practical ski pack to make the affordable avalanche airbag an even better buy.

The Float 2.0 engine and cylinder are visibly smaller than those of the Float 1.0 system. The weight savings are substantial, and the reduction in size is equally valuable. The system now resides in the Float 27’s airbag compartment, freeing up 1.5 liters of precious volume in the gear section. 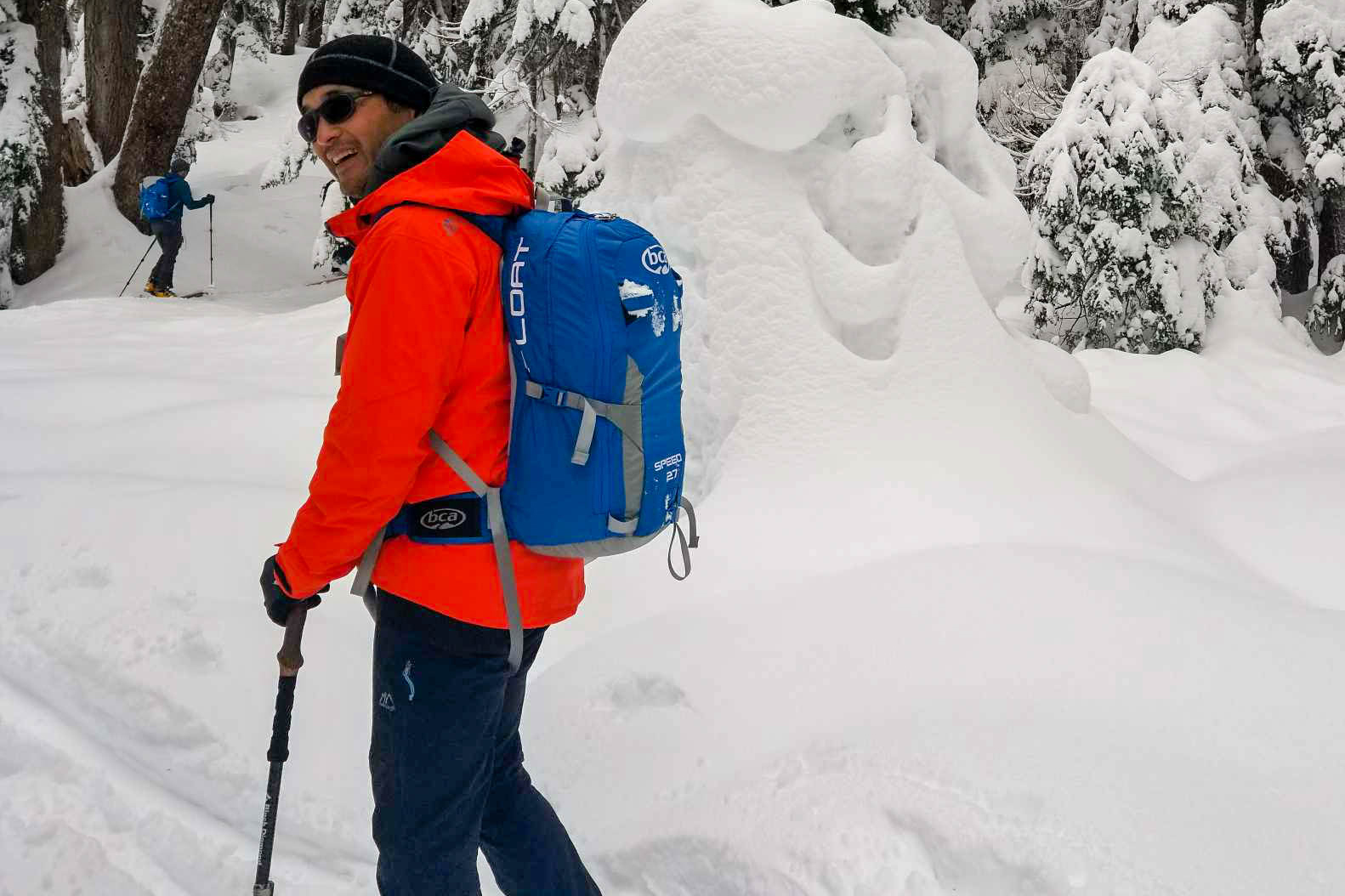 The loss of usable space with canister-based systems as compared to fan-based systems has been a point of contention. With the new engine and canister, BCA has done a great job in mitigating this disadvantage. The trade-off increases airbag inflation time by 0.5 seconds compared to the more substantial and weighty Float 1.0 system.

Like the Float 1.0, the Float 2.0 engine still uses a Venturi valve. This technology allows ambient air to rush into the airbag along with the compressed air, reducing both the time and amount of compressed air necessary to inflate the 150-liter airbag.

And the entirety of the airbag system is detachable from the pack for use outside of avalanche terrain or season.

The Float 27 Speed’s claimed 27 liters of volume is all usable space. The airbag and Float 2.0 engine live in the rear of the pack, and the remaining capacity is in the front compartment, providing quick access to avalanche equipment. Shovel and probe have specific and visible locations and remain separated from the bulk of the gear. A mesh, zipped pocket also resides here to organize smaller items. 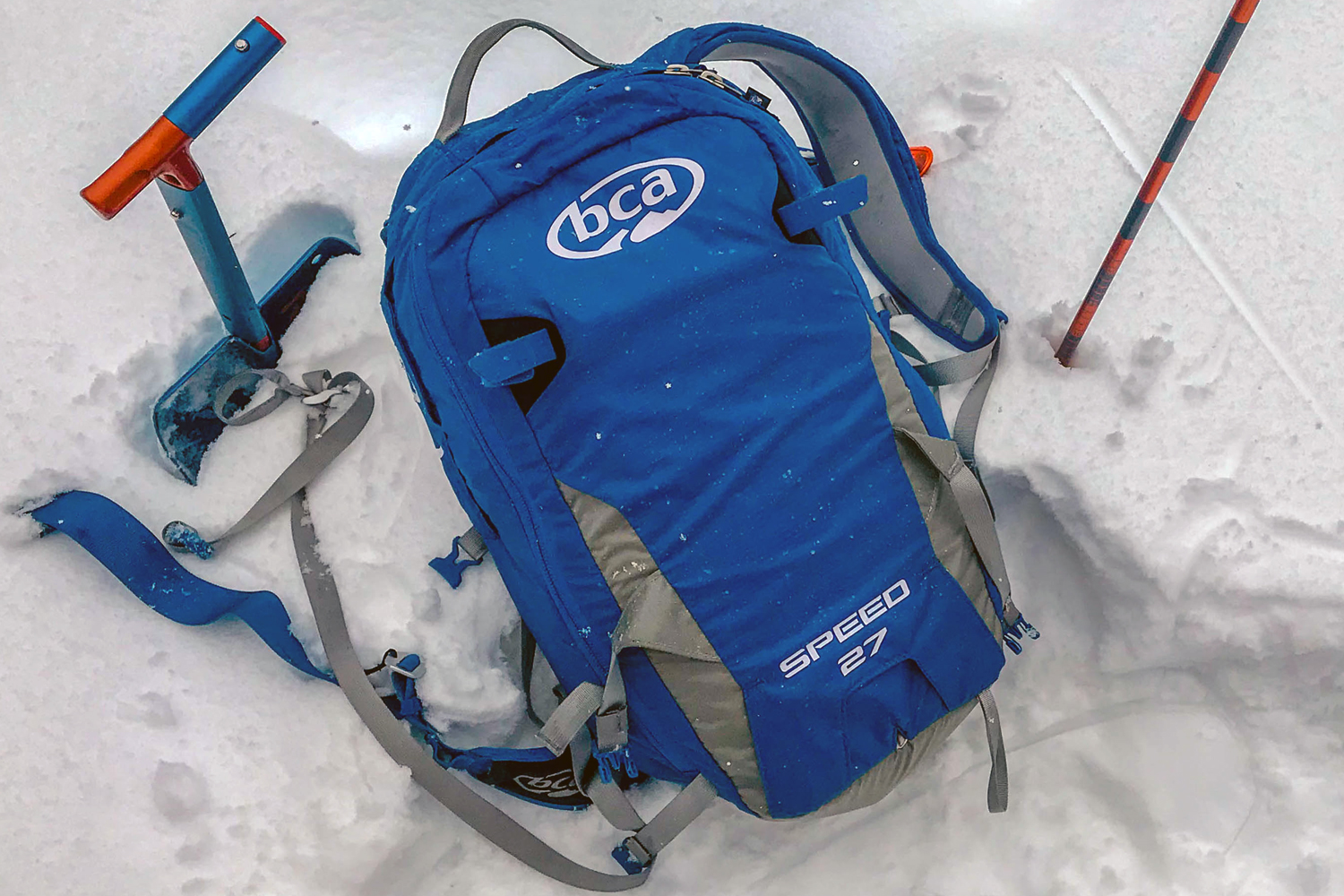 The back panel uses raised, padded “islands” to provide cushioning and air channels. BCA designs the back of the pack to carry skis diagonally with stowable straps (one under the bindings, one higher up on the skis). There is also a single stowable ice ax loop.

Two Velcro gear loops attach to the upper front. A compression strap on each side allow gear lashing and load tightening. The right side of the hip belt has a gear loop, and the left side has an elastic pocket to store the leg loop. All hip belt buckling hardware is crushproof aluminum.

The shoulder straps have vertical zip pockets that run the entire padded length. You can house the airbag trigger on either side, as both will protect it from accidental engagement. Both sides are also compatible with BCA’s BC Link radio system, which you would mount on the opposite side. A sternum strap with a whistle completes the pack.

During Mountain Bureau‘s three-day AIARE 1 avalanche training, we made trips into the backcountry for drills and observations. In the main compartment, I carried an extra down jacket, extra gloves, two liters of water, lunch, snacks, other small accessories, and all avalanche gear. 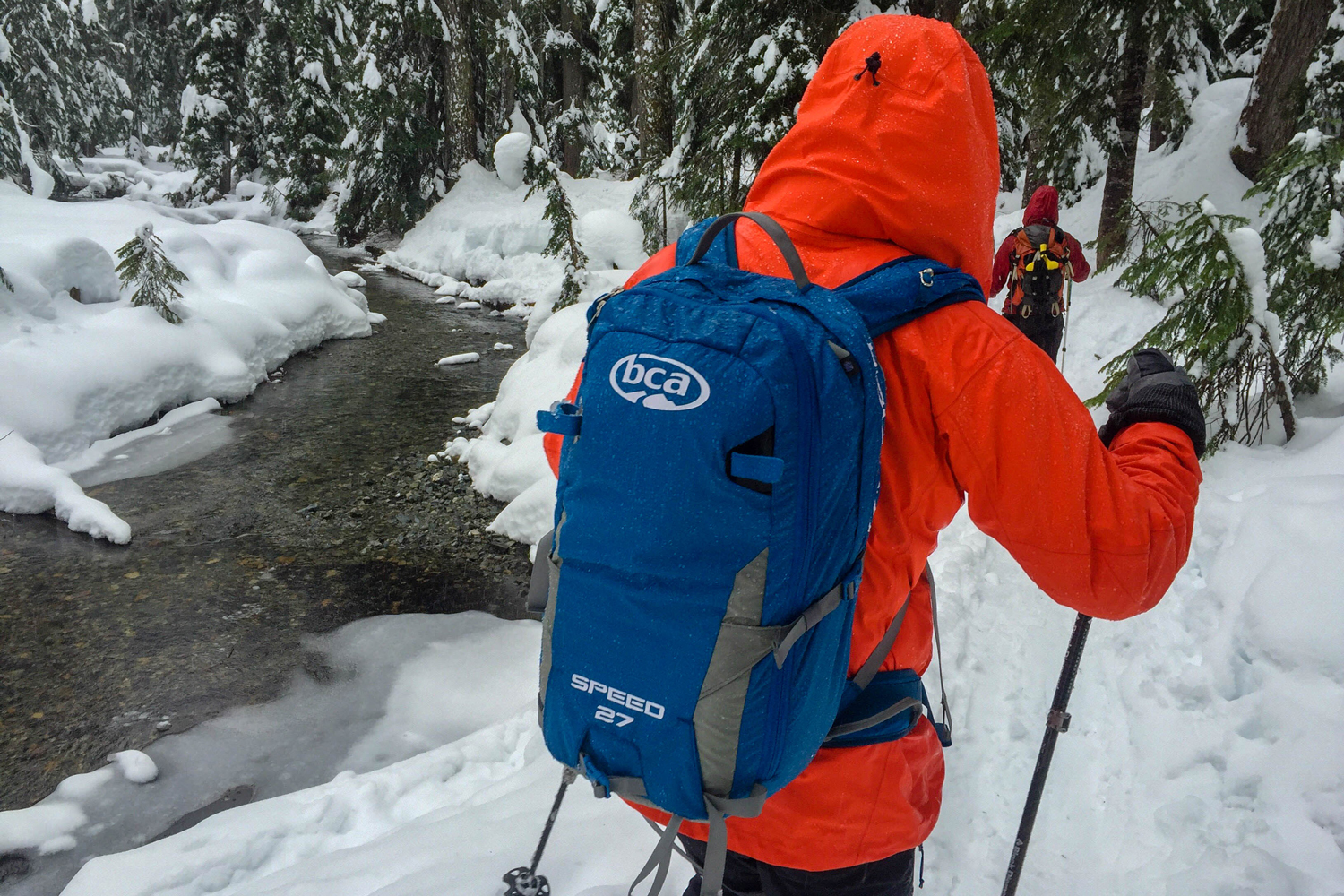 With winter gear on, the pack carried well and fit my 6-foot frame (the Float 27 is only available in one size). Executing recovery drills displayed the organizational prowess of the main compartment: Shovel and probe were easily accessed and quickly deployed. Fully opening the main zip wasn’t necessary.

The compression straps helped stabilize the load during aggressive movement, as the daily loads required for the class didn’t max out the pack’s volume. Unfortunately, I was unable to test the ski carry system.

You hopefully won’t have to use the airbag. But I did test fire it! BCA utilizes a unique bell-shaped trigger, which proved easy to grasp with gloves on (could be more difficult with mitts), with the hand in almost any orientation. Check out the video below!

The Float 2.0 system functioned as designed. With a tug on the trigger, the airbag inflated without hesitation. And it didn’t obscure peripheral vision once deployed.

I also appreciated the airbag’s illustrated instructions for repacking printed on its surface.

There are numerous relative advantages and disadvantages of canister- and fan-based avalanche airbag systems – too many to detail here. But the most obvious? Canister systems are cheaper. Fan systems, while more costly, can be inflated repeatedly on a single charge, and are allowed on airplanes. 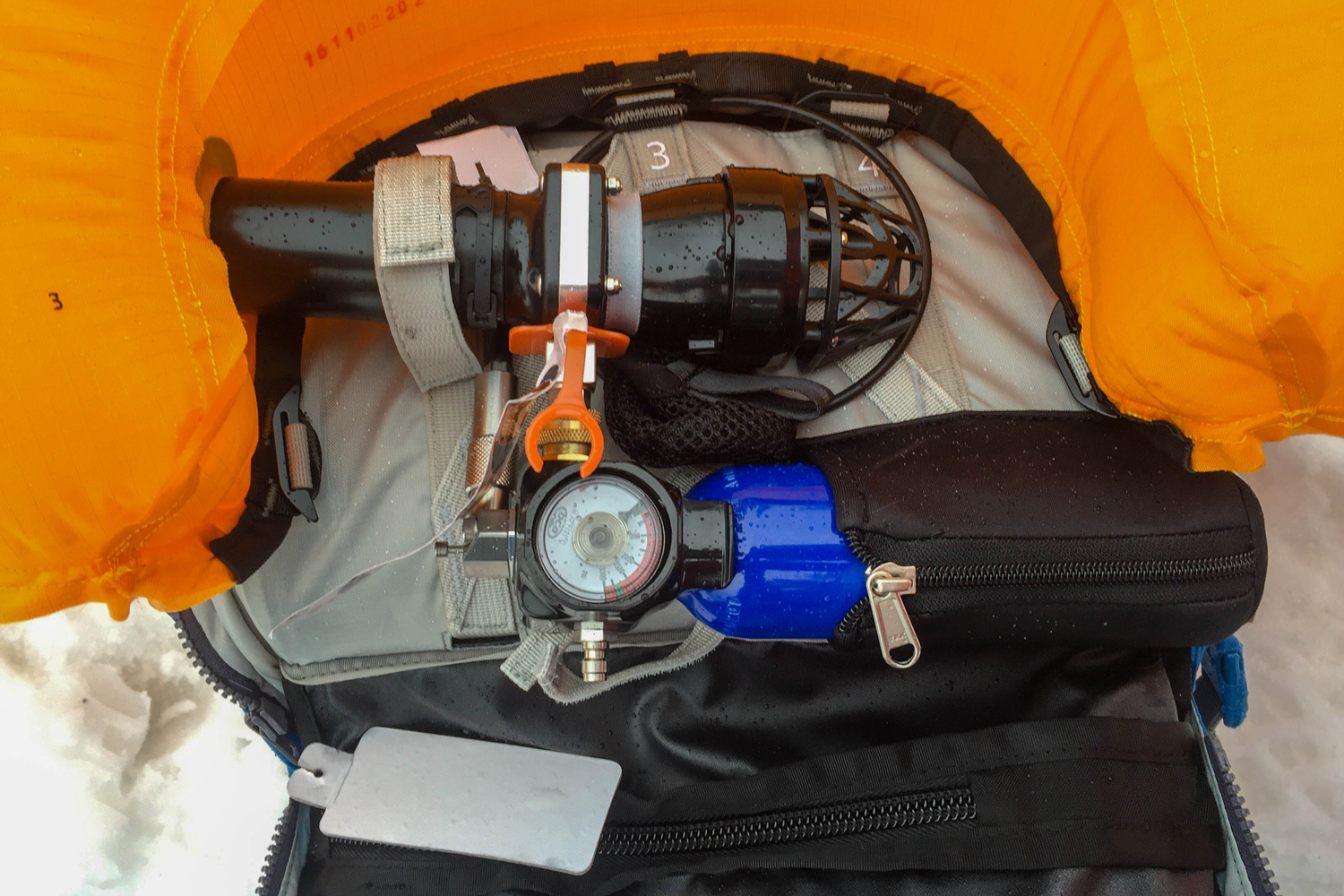 Canister systems are cheaper. That’s their biggest advantage. Avalanche airbags are often one of the most expensive investments for the backcountry adventurer, so lowering the financial barrier puts enhanced safety within reach of more people.

However, filled compressed gas canisters are not allowed on U.S. flights and thus require refills or exchanges at the destination. If you don’t happen to have a high-pressure hand pump – which does the job in about 15 minutes – BCA suggests one of their 200+ certified refill/exchange centers, which provide refills for approximately $20 and exchanges for more.

BCA can also ship filled cylinders to your destination. Flying with empty canisters also necessitates a few precautions to ensure passage through airport security. Fan-based systems are free of these issues.

Fan-based systems are capable of multiple inflations without added financial or physical burden. Other advantages of fan systems are continued protection after a misfire or close call and the higher likelihood of deployment without delay.

Weight is always on the mind of most outdoor enthusiasts. An apples-to-apples comparison of avalanche airbags in the same volume range is difficult due to differences in durability, features, and other factors. Below are some specific product comparisons. 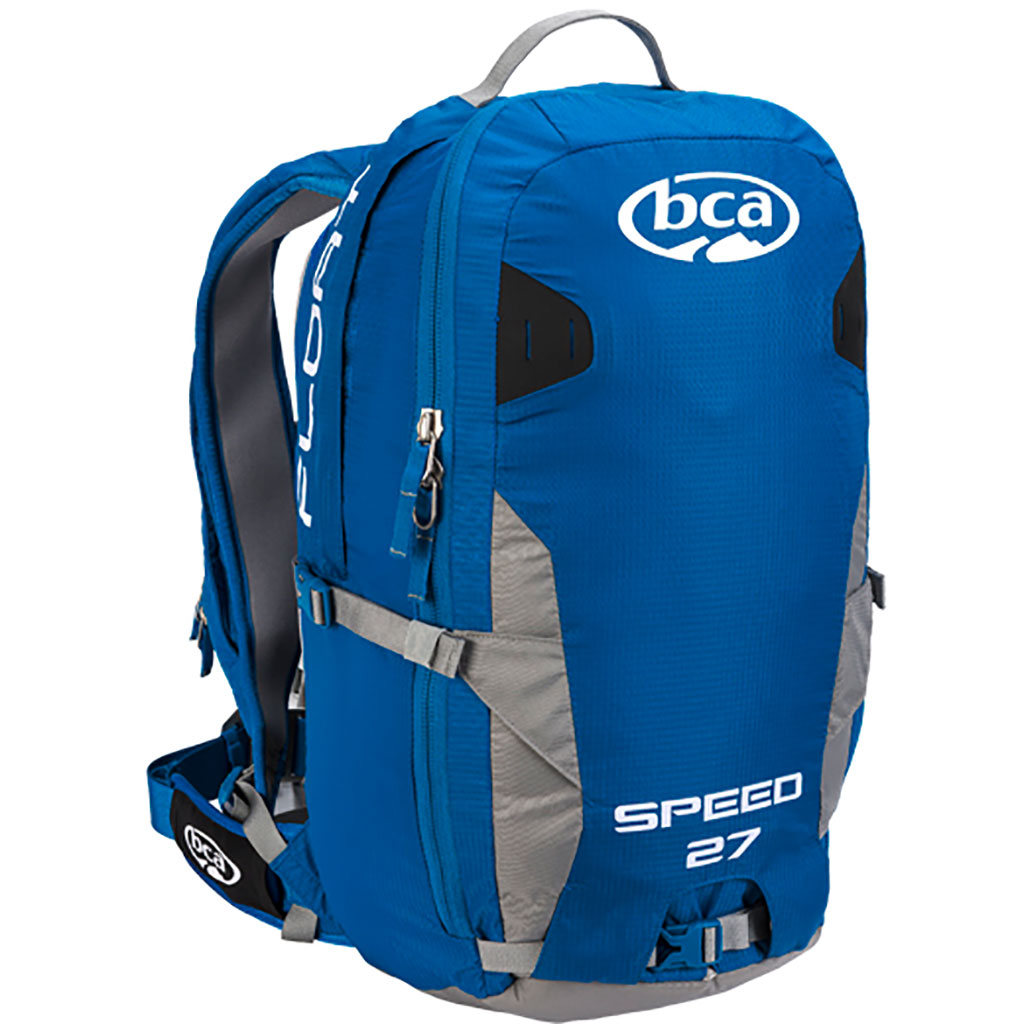 The BCA Float 27 Speed’s verified weight (with empty Float 2.0 canister) is 5 pounds 10 ounces. This is much less weight than the claimed weight of the fan-based Black Diamond Halo 28 JetForce (7 pounds 8 ounces for size L) and the Arc’teryx Voltair 30 (7 pounds 11 ounces).

The Float 27 is heavier than the claimed weight of the canister-based Ortovox Ascent (women’s-specific and weighing 4 pounds 11 ounces) and the Mammut Light Protection Airbag 3.0 (with 28.5-liter capacity and weighing 5 pounds 6 ounces).

The BCA Float 27 Speed’s Float 2.0 system is an upgrade to a tried and true airbag inflation system. The decreased size and weight definitively improve one of the most affordable avalanche airbags.

Although air travel requires extra effort, and multiple deployments aren’t possible with a single canister, the lower cost of one of the most expensive pieces of gear for the winter adventurer presents a more accessible route to safer backcountry travel.