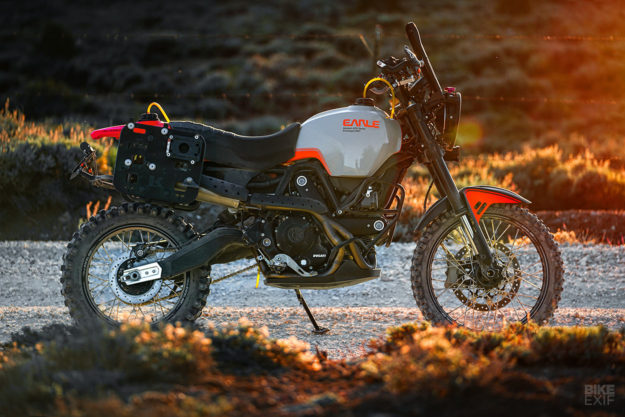 Most customs live relatively sedate lives: buzzing around the city, maybe a blast into the country at the weekend, and then a couple of hours cooling down outside a café or pub.

If you’ve ploughed hundreds of hours and thousands of dollars into a bike, you’re not likely to put it through a torture test. But that’s exactly what LA-based Alex Earle has just done with his latest build. He’s thrashed this Ducati dirt bike for two weeks and hundreds of miles through Alaska’s toughest terrain, and lived to tell us the tale. ‘The Alaskan’ is only Alex Earle’s second build, but he describes it as a return to his roots. It’s a supremely practical machine, designed for long distance, off road expeditions.

“It’s a middleweight ADV bike with all the necessities and none of the frills,” he says. “Rugged and capable.” And also, we might add, very sharp-looking too. Alex is a man with his finger on the pulse. He’s a designer at VW America, and three years ago anticipated the current trend for street trackers with a sleek Ducati Monster conversion.

We were curious to see where his current inspiration comes from, and it turns out to be true adventure bikes: not the kind that dawdle through Baja California, but the kind that might tackle the Road of Bones in the Russian Far East. He’s drawn to “the experience of thriving in an alien, inhospitable place” and cites the film The Martian as a trigger for this concept. Hence the dusty grey bodywork and the striking NASA-themed logo on the tank.

“The concept was to build and campaign a bike for the back roads and trails of Alaska, and make some memories. The vast distances and remote locations require a high degree of self-sufficiency and flexibility, so the bike is endowed with high capacity multi-tanks, armor and a winch.” The Alaskan is based on a 2017 Ducati Desert Sled, which Alex selected for its strengthened frame, longer swingarm and taller suspension—as well as the relatively simple air cooled 803 cc L-twin motor.

“Admittedly the Ducati Scrambler could use a few more horses on the highway,” says Alex. “But in the dirt, the power is ample and easily controlled. All the more reason to stay on the dirt!” Vital extra power is released by the high-mounted Termis, which deliver the usual Ducati bark (“My favorite sound”) and keep the exhaust up out of harm’s way.

Unlike many Ducati Scrambler owners, who gear their bikes a little higher to relax the engine at highway speeds, Alex has geared his down. He’s dropped the ratio about 10% using new sprockets, going from 15F/46R to 14F/48R. He’s also lengthened the swingarm by almost three inches, to aid stability. “It takes the wheelbase out to 62”, which seems ideal for heavily loaded, high-speed dirt,” he says. “It feels a lot like my old [Yamaha] WR.” “This wheel package is critical if you intend to use a bike off-road. The skinny 21″ front cuts through sand and mud, and climbs easily over taller obstacles.”

It also opens up a world of tire options not available to lesser specs. For this trip, Alex used Pirelli Scorpion tires—both Rally and XC Mid-Hards. The biggest visual change is the bodywork, though. The hand-formed fuel tank holds six gallons, and is supplemented by an extra two in the tail unit. Which lifts capacity to almost double the stock 3.57 gallons (13.5 liters).

Right behind is a solo seat, narrow yet plush for long days in the saddle. It’s flanked by a heavy-duty luggage carrier system, with wide enduro-style foot pegs below. Even in July, temperatures in Alaska can drop to the low 50s (11 degrees Celsius), so the Ducati is now sporting heated grips and bark buskers to keep wind chill at bay. And despite the long hours of daylight in the northern summer, this bike pumps out a serious amount of light—via an LED headlamp in a customized protective cage, plus a ‘crazy powerful’ Baja Designs supplementary LED.

There’s a carbon fiber wind deflector to keep the icy wind away, and the low front fender is carbon fiber too. And if the fecal matter hits the air recirculation device, there’s a mount for a compact Warn winch to tug the Desert Sled out of trouble. So The Alaskan is not just a pretty face. But after two weeks of rough track riding and camping, how did it fare?

Alex has just got back to LA, and he’s more than pleased with the bike’s performance. “It exceeded my expectations as an off-roader,” he says. “Really works well in that environment, with deep river crossings, mud, snow and gravel.” “There were a few teething pains that I was able to fix in the field, like leaks from the fuel fittings. But the throttle response, traction, tire/wheel package, load capacity and 250-mile range were all better than I anticipated.”

The Ducati will arrive back in Alex’s garage in a few days, and he’ll tear it down again. “I’m thinking of building a second, stripped-down variant for trips in warmer climes,” he confides.

Sounds like an excellent plan. We’re just hoping we don’t have to wait another three years to see that one. from Bike EXIF http://bit.ly/2KNJe7I
via IFTTT