Despite the best efforts of people who think Reefer Madness is a documentary, marijuana is becoming increasingly normalized in the United States and beyond. At this point, legalization in America seems inevitable as more and more people realize weed doesn’t cause users to go insane and spark a series of unfortunate events that ends with someone jumping out of the window (unless it’s laced with angel dust).

The good people of Canada finally realized it might be time to take a more rational approach to weed when they voted to make it legal across the country starting this fall. Plenty of entrepreneurs have kicked their minds into high gear in an attempt to take advantage of the emerging market— including one company that’s created a one-of-a-kind product that’ll take you to a pretty fun place.

According to The Guardian, Province Brand is the first ever company to brew a “beer” made entirely from cannabis (it harnesses the stalk, roots, and other parts of the plant that are typically discarded). While companies like Lagunitas have dreamed up beers with a similar concept, all of those previous products have been brewed traditionally with malt and hopes.

The major difference here is that Province’s product contains barely any alcohol but each bottle packs a punch of 6.5 mg of THC (which means you probably don’t want to crush a six-pack in one sitting unless you’re a seasoned veteran).

The beer is the brainchild of Dooma Wendschuh, who left the comfort of Miami for Toronto right before legalization was voted into effect. He described the flavor and potency, saying:

“The flavour is dry, savoury, less sweet than a typical beer flavour. The beer hits you very quickly, which is not common for a marijuana edible.”

If you’re not able to make the trip up north to try this remember you can always make a bootleg version by adding a few drops of THC tincture to an earthy IPA.

The latest robots out of MIT are small enough to float “indefinitely” in the air. Researchers accomplished the feat by attaching 2D electronics to colloids — tiny particles measuring around one-billionth to one-millionth of a meter. All told, the devices are roughly the size of a human egg cell.

What’s more, the addition of photodiode semiconductors means the tiny individual systems are able to to be self-powered, without the need for a battery. The system converts light into a small electrical charge that’s enough to keep the device’s on-board environmental sensors running, while storing on-board information.

As to what these tiny robots are actually good for, MIT plans to send them into hard to reach spots to monitor environments. The two at the top of the list are pipelines and the human body — so, two very different kinds of plumbing systems, really.

“The researchers hope to lay the groundwork for devices that could be dispersed to carry out diagnostic journeys through anything from the human digestive system to oil and gas pipelines,” MIT says, “or perhaps to waft through air to measure compounds inside a chemical processor or refinery.”

Basically you send it in one end and retrieve it on the other — which, again, means…different things in different systems. Once retrieved, information collected by the sensors can be downloaded off the system and analyzed.

from TechCrunch https://tcrn.ch/2mBxh6g
via IFTTT

The Andromeda galaxy is our closest galactic neighbor, and it apparently has been hiding a dark past. Scientists from the University of Michigan discovered that this sinister figure cannibalized our sibling approximately two billion years ago. That’s right, at one point, the Milky Way had a sister galaxy, and Andromeda ate it.

Scientists have been aware for some time that a large galaxy like Andromeda probably ate smaller galaxies around it; that’s where the halo of stars surrounding Andromeda comes from. But there was really no way to determine how many galaxies it had consumed over the course of its lifetime, nor how insatiable its hunger may have been. But now, using computer models, researchers have determined that much of that outer halo is actually composed of one larger galaxy that Andromeda mercilessly ripped into.

“Astronomers have been studying the Local Group — the Milky Way, Andromeda and their companions — for so long. It was shocking to realize that the Milky Way had a large sibling, and we never knew about it,” said Eric Bell, a co-author of the paper published in Nature Astronomy about the discovery, in a release. The sister galaxy, called M32p, was massive, third in size only to Andromeda and the Milky Way in our small section of the universe.

What’s more, this revelation may also solve a secondary mystery: Andromeda has a small satellite galaxy, M32, and scientists don’t know where it originated. Using this theory, they can extrapolate that the dense, compact galaxy is actually the remnant of M32p. “M32 is a weirdo,” Bell continued. “While it looks like a compact example of an old, elliptical galaxy, it actually has lots of young stars. It’s one of the most compact galaxies in the universe. There isn’t another galaxy like it.”

Not only does this discovery help scientists learn more about the universe around us, how we got here and how galaxies evolve, but it also tells us just how mean Andromeda is. While our large and menacing neighbor is not actually coming for us anytime soon, it’s going to happen eventually, and we’d best be prepared for the fight.

from Engadget https://engt.co/2mAZzOl
via IFTTT

Leveraging robotics to undertake dangerous missions has obvious benefits for mankind, and space travel is no exception. In 2011, NASA sent its dexterous assistant ‘Robonaut 2‘ on a trip to the International Space Station (ISS) with the objective of working alongside presiding astronauts. Now a “source in the rocket and space industry” tells RIA Novosti that a Russian android duo could be following suit as early as next year.

According to Defense One, the FEDOR androids will, in an unprecedented move, fly on the unmanned Soyuz spacecraft not as cargo, but as crew members. The Roscosmos space agency has reportedly given the flight its preliminary approval. We’ve reached out for further confirmation on this front.

FEDOR, an abbreviation of Final Experimental Demonstration Object Research, refers to a 2014 program that aimed to create a robot capable of replacing humans during high-risk scenarios such as rescue missions. The androids have been endowed with a number of abilities, including driving, push-ups, lifting weights, and, you guessed it, shooting. Former Deputy PM Dmitry Rogozin then had to deny Russia was “creating a terminator”.

With rapid developments in the AI arena, the question of whether it will be used for destructive or benevolent purposes is always on the table, but Rogozin assured that FEDOR would have “great practical significance in various fields.” Backing up those comments is CNA associate research analyst Samuel Bendett, who points out that despite its military-ready build, FEDOR was designed to function in space from the beginning.

from Engadget https://engt.co/2A21UeN
via IFTTT

One of the biggest challenges in tapping millimeter waves (mmWaves) for 5G is overcoming signal interference. Because they’re easily disrupted by something as simple as someone walking in between a transmitter and receiver, mmWaves require technological finesse to be harnessed reliably. To that end, Qualcomm today unveiled what it says is the world’s “first fully-integrated 5G NR mmWave and sub-6 GHz RF modules for smartphones and other mobile devices.” These are the QTM052 mmWave antenna module family and the QPM56xx sub-6 GHz radio frequency (RF) module, and they’ll pair with the company’s previously announced Snapdragon X50 5G modem — making next-gen phone networks a reality very soon.

If you recall, a bunch of major smartphone makers, including Samsung, LG, Sony, HTC and Xiaomi already said they’ll be working with Qualcomm, and most of them commited to delivering X50-powered phones by the first half of 2019. Those devices will likely use the new antenna and RF modules announced today. Qualcomm told Engadget it has already shipped samples out to its device partners, and will be working with them to figure out the best placement to minimize signal interference due to hand blocking. 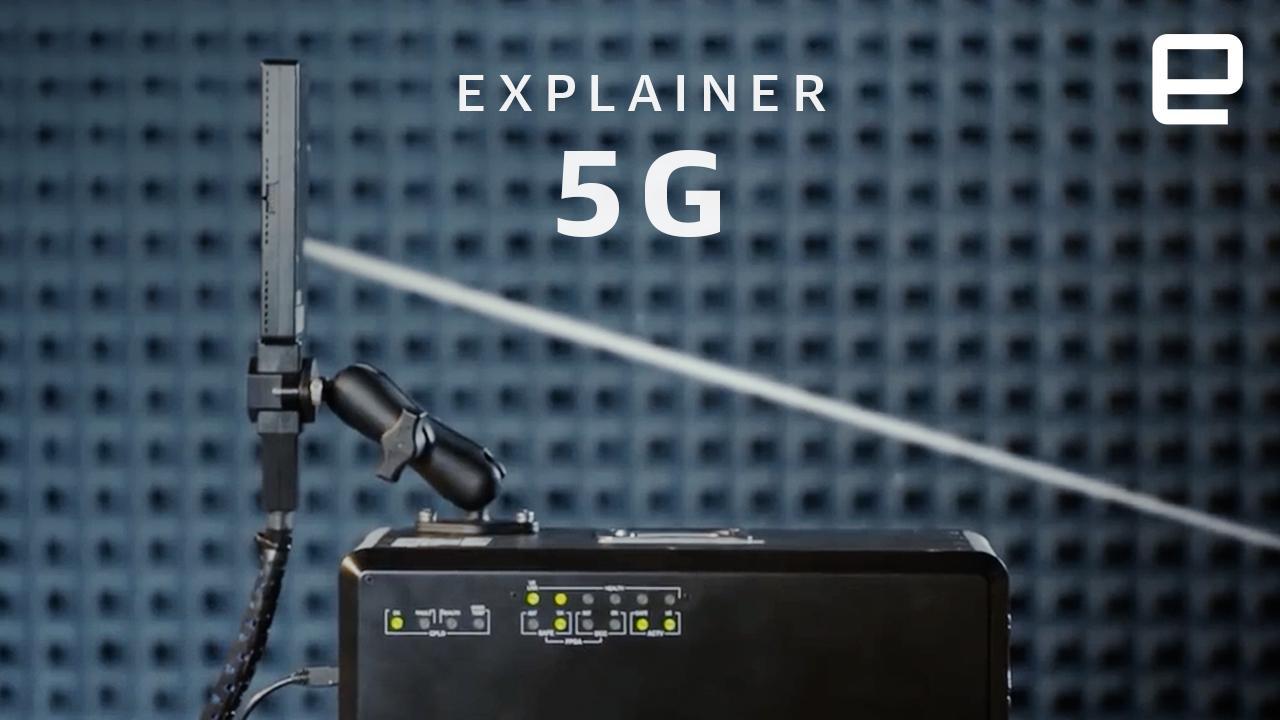 Up to four modules can be used in a smartphone, and each of them is barely the size of a fingertip. An integrated 5G NR radio transceiver and other components, together with the X50 modem, help the antennas seek out mmWaves in supported bands.

According to the company’s statement, “a working mobile mmWave solution … was previously thought unattainable.” Now, however, Qualcomm said it is “ready for large scale commercialization,” which means we are that much closer to seeing 5G devices in the real world soon.

There’s still a way to go before next year’s deadline, and in the meantime, carriers are racing to get their 5G networks ready. It won’t be too long till we’re all livestreaming our favorite shows in 4K VR wherever we go and buffering time becomes a thing of the past, so treasure the mental breaks while you still have them.

from Engadget https://engt.co/2LHB1OE
via IFTTT Summer festivals? No, the most epic onstage moment for this summer has to be Kraftwerk jamming live with the International Space Station – and an iPad as the first electronic musical instrument in space.

Take a look (German-language text with English-language subtitles) – and spot the riff from Close Encounters:

In front of a crowd gathered in Stuttgart, Gerst announces from the international space outpost:

I am one of only six people in space, on the outpost of humanity, the International Space Station ISS, 400 kilometers above sea level. The ISS is a Man Machine – the most complex and valuable machine humankind has ever built.

Here in the European Columbus laboratory, the successor to the Spacelab, the European Space Agency ESA is researching things that will improve daily life on Earth. More than 100 different nations work together peacefully here and achieve things that a single nation could never achieve. We are developing technologies on board the ISS to grow beyond our current horizons and prepare to take further steps into space, to the Moon and Mars.

The app is Lemur, the landmark touch control app, with another soft synth behind it making the sound.

The venue is the Jazz Open Festival, with a crowd of 7500 people in Stuttgart. (Hence the cheers as a UFO flies above the TV tower in the city.)

Dr. Alexander Gerst is a geophysicist as well as astronaut. This is his third mission to the ISS, and puts him in space from 6 June to the middle of December, 2018, as commander of the space station. That makes him only the second ESA astronaut to take command, after Frank de Winne on Expedition 21. (The latter I’ve had the pleasure to have dinner with, thanks to ESA. I asked him about sound, of course. His answer: the space station is almost deafeningly loud, not perhaps the soft purr you have in mind after watching Star Trek: The Next Generation – the Russian section being loudest of all, because of particular equipment it stores. They also use sound as one diagnostic for how equipment is working, though.)

Plus if you’ve seen The Martian, the character of Alex Vogel draws some elements from the real-life Dr. Gerst.

Kraftwerk of course had their own track “Spacelab” (1978). The name comes from a research laboratory developed in the 1970s as a joint project between NASA and European Space agency predecessor ESRO. ESA tells us that the environment Commander Gerst is in now, ESA’s Columbus laboratory module, is a direct descendant of that project. It’s a massive 75 cubic meters (well, massive when you’re launching that into space), packed with research equipment handling space science, Earth observation and technology, materials science, and more.

Gerst had a special tailor-made suite of software created for him on that iPad.

And so what you get is a convergence of science and culture, all in the European sphere.

More on the ESA-hosted blog for the astronaut: