George Woodman doesn’t build many bikes, but his creations always raise a big smile around the EXIF offices. This is ‘Wild Horse,’ a heavily modified Honda SS50 that’s as fresh as a mouthful of popping candy.

It’s got plenty of zing too: the original 49 cc air-cooled single has been swapped out for a 190 cc engine, prepared by the pit bike tuner Stomp. Power is up to 22 frisky horses, which translates to a very lively ride on a machine with a wheelbase of just 46 inches (1.18m). ‘George Woodman’ is the motorcycling nom de plume of master woodworker Sébastien Valliergues. He’s based in Biarritz—home to the Wheels & Waves festival—and builds two or three bikes a year for fun.

It may be a sideline for Sébastien, but he has a lot of fans—including a few in high places. One of those is Bobby Haas, who bought Sébastien’s amazing 1929 FN ‘Smoking Black Fish’ to put on display in the Haas Moto Museum in Dallas. It’s Sébastien’s clever use of wood on his builds that sets them apart. It’s invariably subtle and well judged, but on this humble SS50 moped, the biggest change is to the powertrain.

The engine is from Zongshen, and it was a surprisingly easy fit. “Like the Dax or the Z Monkey, the SS50 can take several ‘horizontal’ dirt bike engines,” says Sébastien. This particular engine is built in the same factory as the Daytona Anima FLX, a legendary pit bike engine. Like late model SS50s, it’s hooked up to five-speed ‘box, but it’ll stay on the boil for much longer. The new exhaust is from the French company ID Vintage.

To keep the show on the road, Sébastien has done a complete suspension swap, installing new forks from the British minibike specialist YCF via custom yokes, and new gas shocks from Kepspeed. The elegant swing arm is from Kepspeed too. “It’s a brand that makes a lot of parts for mini Hondas,” Sébastien explains.

“This item was for a Honda Cub, so I had to make some adjustments to make it fit—and to add a disc brake at the rear.” 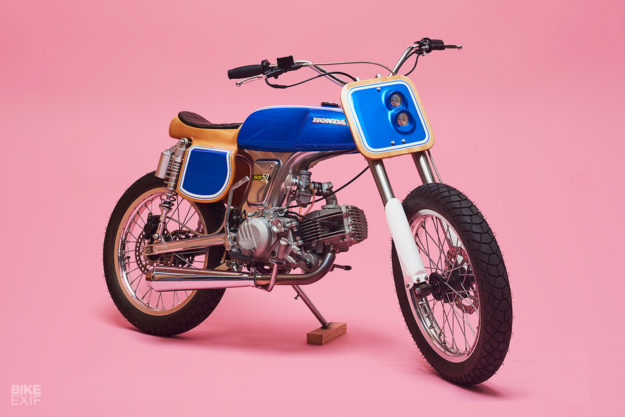 “Sadly, they’re aren’t many custom parts for the SS50, so I often need to adapt parts.”

He’s also modified the frame, and slightly shifted the position of the tank. The frame is now shorter, and the rear of the tank sits higher—for a flatter top line. Jérome Lopez of Colorside applied a black base coat of paint to the frame before finishing it in a glossy chrome top coat. The stunning wood seat base, which curves down into flat track style side panels, is crafted from beech wood.

New bars from ID Vintage accentuate the flat track style, and the wheels have gone up a size from 17 to 18 inches. Sébastien’s also installed a new disc brake at the front to keep the SS50 safe in modern traffic. The tires are Michelin’s lightweight M45 pattern, which can handle a little off-road work too.

The electrics have been completely overhauled, with a new electric start system, new switchgear on the bars, discreet blinkers, and a pair of compact halogen headlights set into a square beech wood front plate. ‘Wild Horse’ looks like more fun than a barrel of monkeys, and it’s packing a ton of style too. “The ratio of power to weight is stupid—and that’s what makes it so fun to ride,” says Sébastien.

He’s planning to build another SS50 soon, this time purely for off-road use, and then a Honda S90 for his fiancée. Next on the list is a range of electric motorcycles for summer 2019.

Not bad for a sideline, is it? from Bike EXIF http://bit.ly/2NCbPJK
via IFTTT