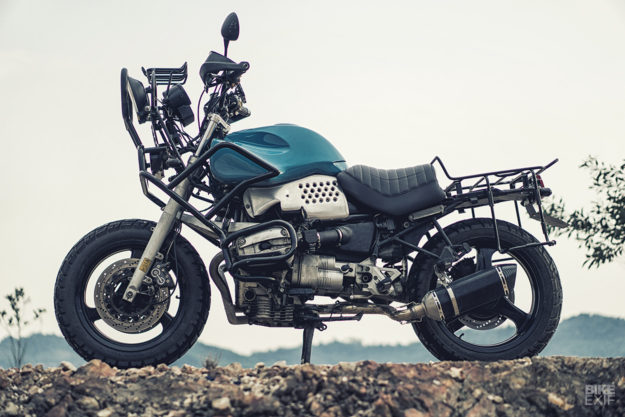 There are a few bikes out there, a tiny handful, that have slipped under the custom radar. BMW’s mighty R1100 RS sport tourer is one of them: despite over 26,000 leaving the factory in the 90s, it seems to have been mostly ignored by builders.

Maybe that’s because the Telelever/Paralever suspension is hard to modify. Or maybe the huge plastic shroud of bodywork is off-putting. That hasn’t deterred Beautiful Machines of Malaysia, though: they’ve just delivered one of the most extreme BMWs we’ve seen for years. Well, since El Solitario’s infamous ‘Impostor’ R nineT of five years ago, at least …

Based in the densely urban district of Petaling, Beautiful Machines is a collective of enthusiasts from a range of different backgrounds. In the group is a commercials director, a moto gear salesman, a tattoo artist, and a head mechanic and fabricator. Everyone chips in and plays a role in the building process.

We spoke with one of the group, Jeremy, to find out more about this bizarre yet beautiful machine. 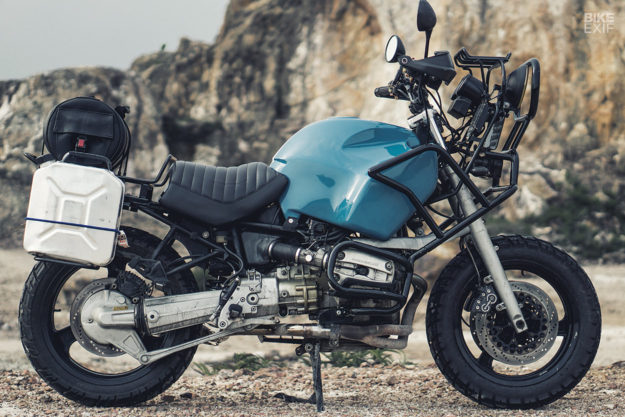 “The R1100 RS has a lot of body parts and fairings, so we stripped it down to see what treasures were hidden,” he tells us. “With a huge tank and a high front end, we went with a Dakar Rally-esque look for the build.”

Called Tebuan Biru (‘Blue Tumble’), the 1996 R1100 is a personal build belonging to one of Beautiful Machines’ founders, Rajay Singh. It was in good running condition, with no mechanical maladies to fix. “It rode fine, but then the itch started,” says Jeremy. “We thought we’d try something different.”

And different it certainly is. The customizing is mostly in the bodywork, and Jeremy’s crew have managed to radically change the look of the R1100 without firing up the grinder or spinning the English wheel. “We kept the whole geometry pretty much original, with the stock engine and suspension—this bike is going to be a daily ride,” says Jeremy. “We slimmed the BMW down by removing all the fairings, and then removed the pillion section from the seat to create space for multi-function cargo racks behind.”

The rear rack has been fabricated so that it can easily carry a hard cell fuel tank and plenty of luggage for a long journey. The most obvious change is at the front, with a very peculiar profile created by a tubular frame. This houses huge dual Hella Comet 500 lamps, the instrument cluster, and another multipurpose rack on top.

“With most builds, we usually like to create a low profile at the front—but in this case, doing the opposite gave this bike a really cool and unique look,” says Jeremy. The R259 ‘oilhead’ engine punches out 90 hp and a solid 70 pounds feet of torque, and tops out at over 130 mph. So Beautiful Machines have left the internals of the boxer motor alone, and fabricated a new stainless exhaust system, terminating it with an extremely beefy muffler.

After removing the R1100 RS’ slab-sided bodywork, Beautiful Machines were left with a gap under the tank—so they’ve created a side panel that echoes the industrial look of the bike. 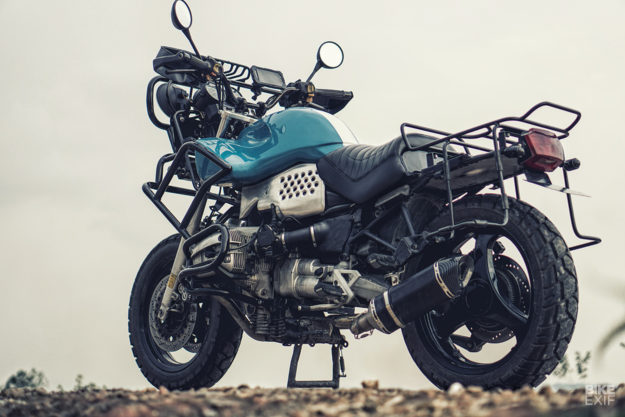 Finished off with a slick lick of deep French blue paint and new leather for the seat, the big BMW is now ready for long-distance action. And despite the huge presence and apocalyptic looks, it’s surprisingly practical. from Bike EXIF http://bit.ly/2SPxVMv
via IFTTT