Shortly after displaying its consumer 8K MFT camera prototype at CES 2019, Sharp has announced that it’s officially joining the Micro Four Thirds market. Along with Olympus and Panasonic, Sharp will now also add MFT products to their lineup.

As Tech Radar notes, there was a slight decline in the MFT camera market in 2018. Olympus was having a hard time, so it held off from releasing new gear until January 2019. On the other hand, Panasonic switched to full-frame cameras. Only today it announced a new MFT camera, Lumix G95.

Olympus issued a press release announcing that Sharp has declared support for Micro Four Thirds system and that “it will be introducing products compliant with the standard.” There’s no word on the 8K camera that we saw at this year’s CES, though. However, it’s likely that we will hear more about it at NAB in Las Vegas, which starts this weekend. If we find out more, we’ll keep you posted, so stay tuned.

from DIYPhotography.net -Hacking Photography, One Picture At A Time http://bit.ly/2WLqc3h
via IFTTT "Amazon is not too big to fail. In fact, I predict Amazon will fail."

That’s what Jeff Bezos, CEO and founder of Amazon, said to his staff during an all-hands meeting in 2018.

"Amazon will go bankrupt,” he continued. If you look at large companies, their lifespans tend to be 30-plus years, not a hundred-plus years."

Bezos is right. The average US public company is dying younger than ever, around age 30, according to Martin Reeves, a strategist who gave a popular TED talk about how to build a company that lasts for 100 years.

Another startling statistic: Reeves says 32% of companies won’t exist 5 years from now, whether they’re acquired or they flat-out fail.

How do you keep a company from dying?

Bezos says his goal is not to keep Amazon from dying, it’s to keep it from dying during his lifetime. To do this, he uses an innovation philosophy dubbed "Day 1."

I recently gave a talk on Bezos’ Day 1 strategies at an Axel Springer Leadership Summit in Germany. Here’s the playbook Bezos uses to build a company that lasts.

Imagine if your CEO stood in front of your company and said, "We’re going to die." That’s what Jeff Bezos has done over and over again. Bezos has repeatedly said that he expects Amazon will one day go out of business.

That’s not because the company isn’t doing great right now. It’s because if you look at the stats, all companies eventually die and get replaced.

It turns out companies are dying younger than ever. The average US public company only lives to be about 30 years old. Perhaps more startling: 32% of companies won’t exist five years from now, according to strategist Martin Reeves, who gave a TED Talk on how to build a 100-year-old company.

So, how do you delay a company’s inevitable death? Jeff Bezos’ answer: Bezos has been talking about Day 1 for decades. He works in a building on Amazon’s headquarters called "Day 1."

Today, he signs his shareholder letters with, "It remains Day 1."

"Day 1" is the innovation and growth phase of a company.

If you’re a CEO, you don’t want to find out.

from SAI http://bit.ly/2uSwRwp
via IFTTT 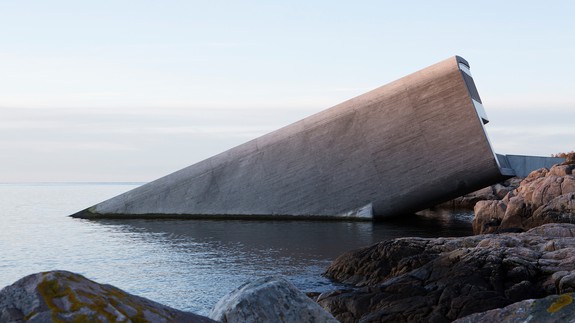 Under opened its doors earlier this year, offering spectacular views of the seabed, 16 feet below sea level. Dinner starts at $260, but that’s if you get a table at the restaurant, sold out until September 2019. Read more… from Mashable! http://bit.ly/2K8Pmr6
via IFTTT

Yoshua Bengio, who last month won the prestigious Turing award, alongside Geoffrey Hinton and Yann LeCun, for his work on AI, is worried about what the technology is being made into behind closed doors. In an interview with Nature, he explains his concerns, but takes care to avoid sounding like a doomsayer.

A professor at the Montreal Institute for Learning Algorithms, his main concern is not a particular nightmare scenario but simply that AI is being pursued by people who have few controls in place.

“A lot of what is most concerning is not happening in broad daylight,” he said. “It’s happening in military labs, in security organizations, in private companies providing services to governments or the police.”

This we have certainly seen, with all the major tech companies in one way or another providing or considering government and military work, from the benign to the clearly conflict-oriented. “Killer drones are a big concern,” Bengio said bluntly. It may be that AI being researched in this way could save or better many lives — but how can we know unless that research is performed in the open?

Even models and ideas invented with good intentions can be subverted by a bad actor, he said. “The dangers of abuse, especially by authoritarian governments, are very real. Essentially, AI is a tool that can be used by those in power to keep that power, and to increase it.” So it is not enough for one organization or government to promise ethical use or abide by best practices. The next one (or the next leader in the same one) may not.

The solution, he believes, is open and structured discussion, followed by strong, clear regulation enacted internationally.

“Self-regulation is not going to work. Do you think that voluntary taxation works? It doesn’t,” he said. “Companies that follow ethical guidelines would be disadvantaged with respect to the companies that do not. It’s like driving. Whether it’s on the left or the right side, everybody needs to drive in the same way; otherwise, we’re in trouble.”

For a start, he recommends researchers and others study and sign the Montreal Declaration, a set of principles such as respect for autonomy, privacy and diversity.

Despite all this, Bengio is sanguine as to the future of the technology — it’s hard to imagine someone being so deeply and continuously involved in it without being so. The rest of the interview is similarly interesting, as he has a straightforward and realistic yet optimistic view of other issues facing the AI community. Read it here.

from TechCrunch https://tcrn.ch/2I03xga
via IFTTT