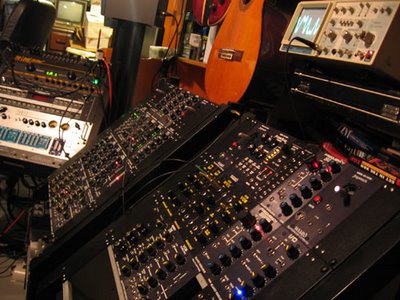 It’s come to my attention that

Mike McGrath, founder of the Muff Wiggler forum, has passed away

. I am in complete shock. I don’t know what to say, what to post. As most of you know, Mike created the de facto modular synth forum on the internet,

, and he did it in a way that put members first. He created a platform for makers and users of synths to come together and engage directly with each other.

Some personal history:  Mike reached out to me years ago, before starting the Muff Wiggler forum. He actually had a couple of blogs including

Muff Wiggler before the forum

. That image to the left is the first image of his I posted

(he also had a

that was the envy of many synth enthusiasts). The last post from Mike went up back on July 30, 2018 when he

gave away a Buchla Music Easel to save a life

I met Mike at NAMM, and at the opening of the Muff Wiggler store in Portland

. We chatted off and on over email over the years and he was always supportive. He was real and down to earth. I was looking forward to reminiscing with him on the "old days" and what it was like for him to run the best modular (and synth) forum on the net. He once corrected me when I said he ran the best modular forum – he said the forum covered synths too! 🙂

I just can’t believe he is gone. As the host of this site, I feel like I lost a fellow compatriot. Someone I had history with through the ups and downs. Running a site can be a challenge, and just knowing he was out there doing his thing helped. I am going to miss him and the lost experiences we would all have had with him around.

from MATRIXSYNTH http://bit.ly/2UtW9vj
via IFTTT