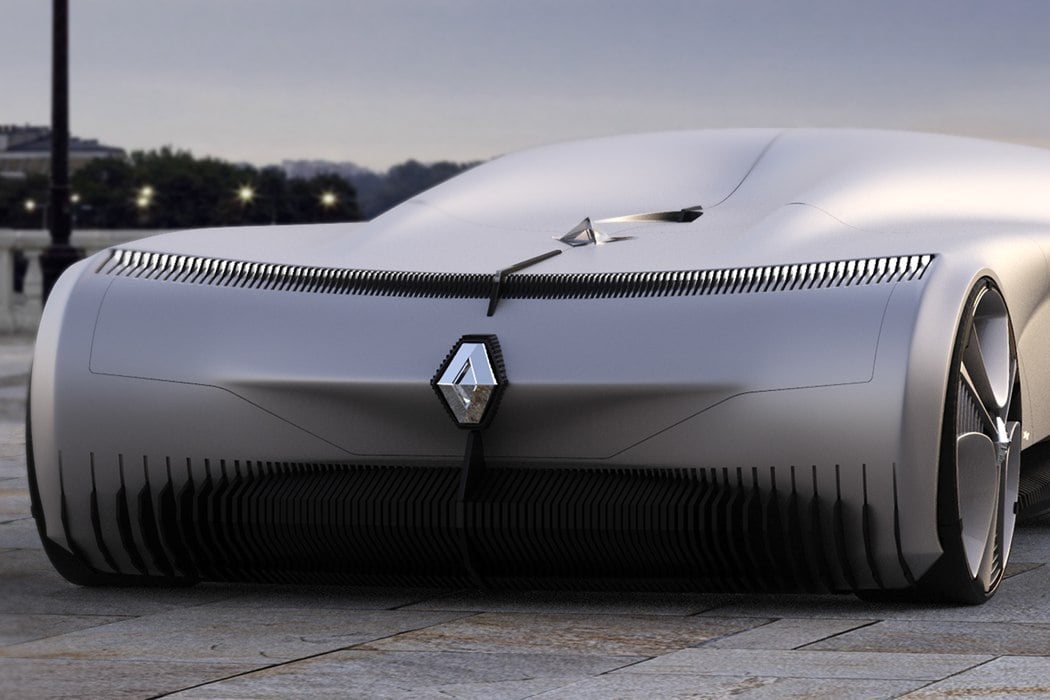 If the future of vehicles is even half as beautiful as this, then we cannot wait! This elegant concept is the ‘Renault Project XY-2’, its designer recognized the societal change that autonomous sharing cars may introduce; where strangers meet and are accompanied on their journeys. So why can’t the vehicle have a secondary purpose, one which elevates it from being simply a mode of transport? Well Project XY-2 features a rather unique and unexpected secondary function… it has been designed to assist in the daunting dating process!

This has been achieved through a progressive meeting process; for the first section of the journey the passengers will find themselves on a blind-date and only able to communicate vocally through the partition that separates them. As the journey progresses, so does their date! Once they have been aquatinted with one another, their seats will slide backwards towards the rear of the vehicle where the partition has been removed and they will be introduced to each other properly! 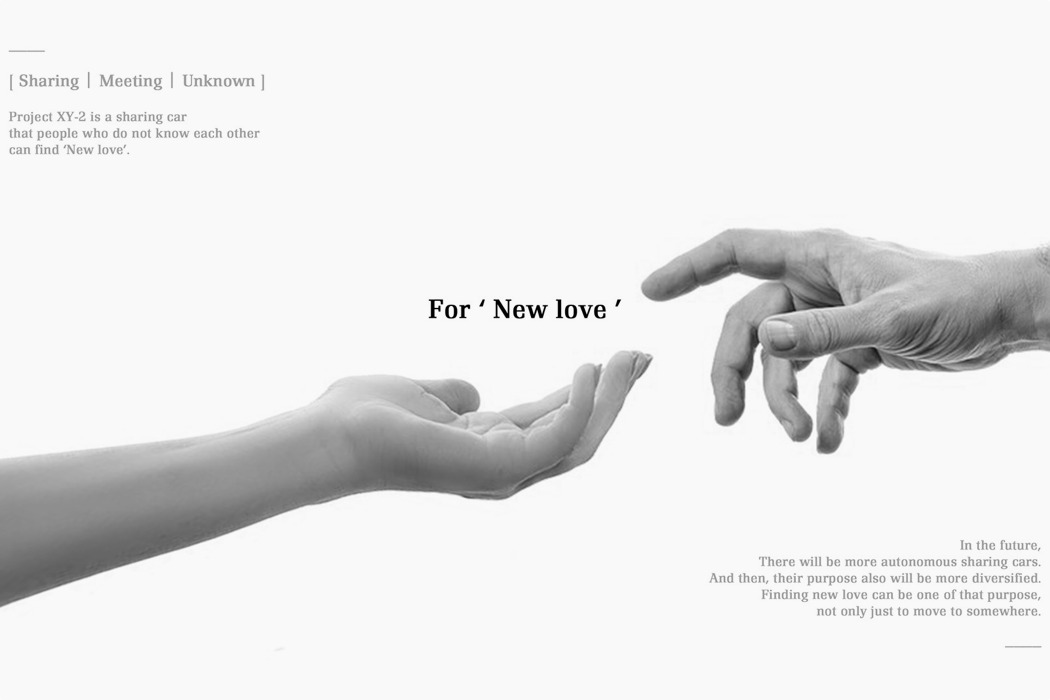 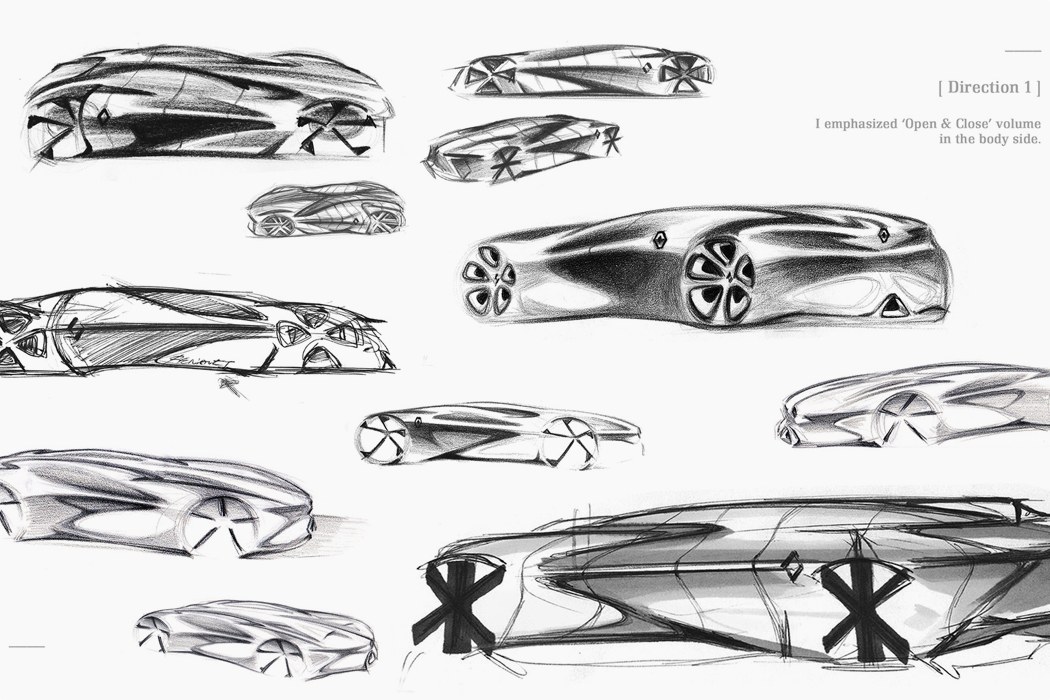 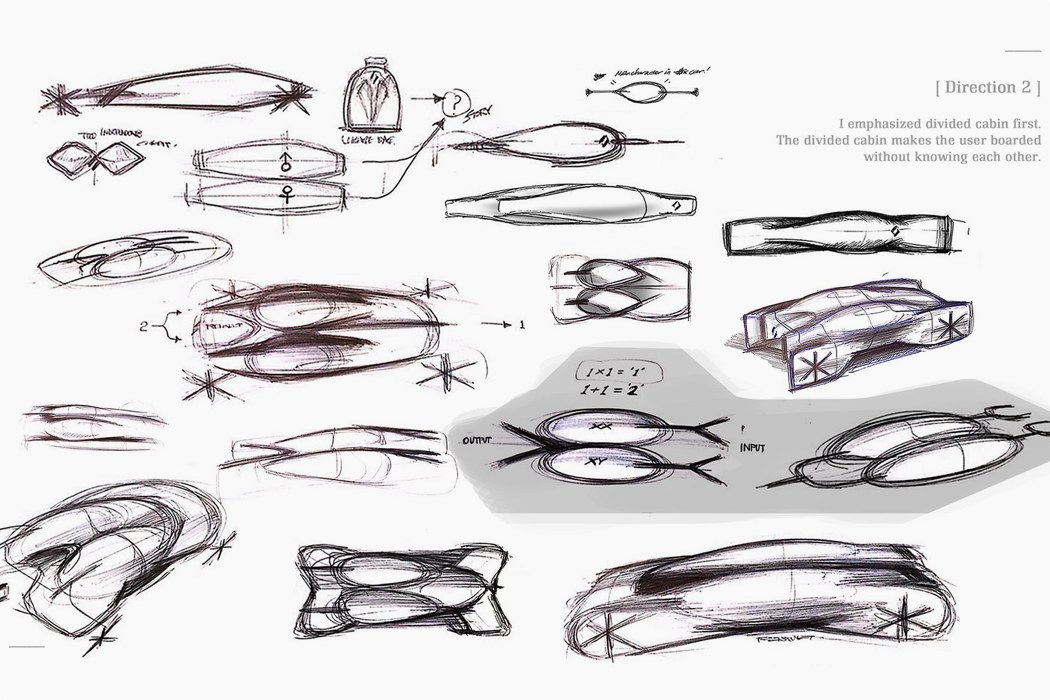 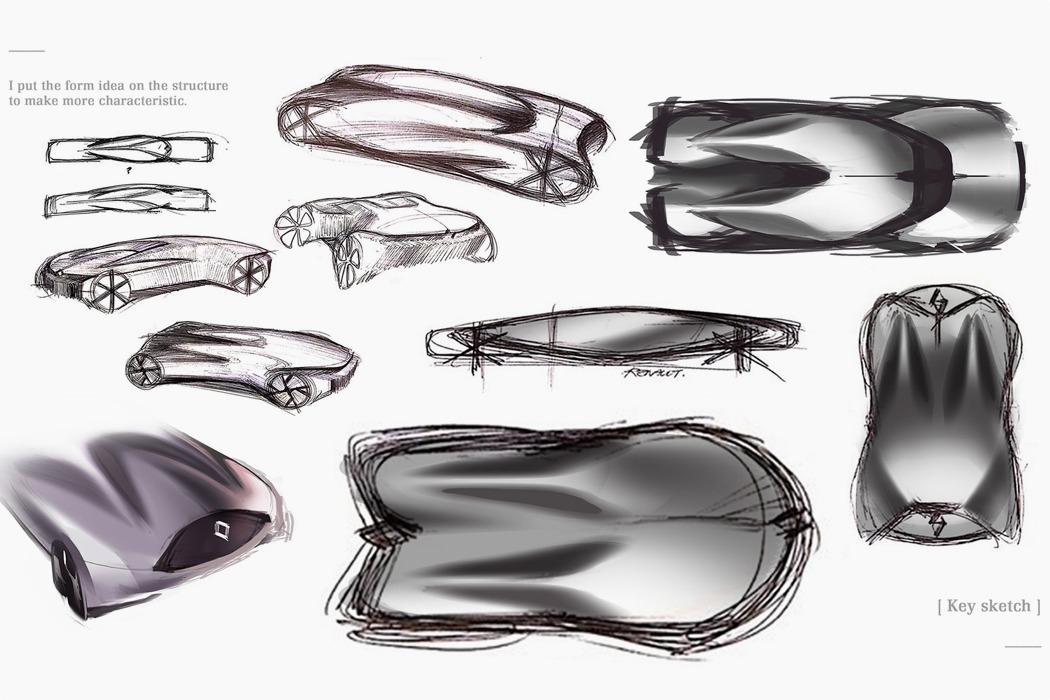 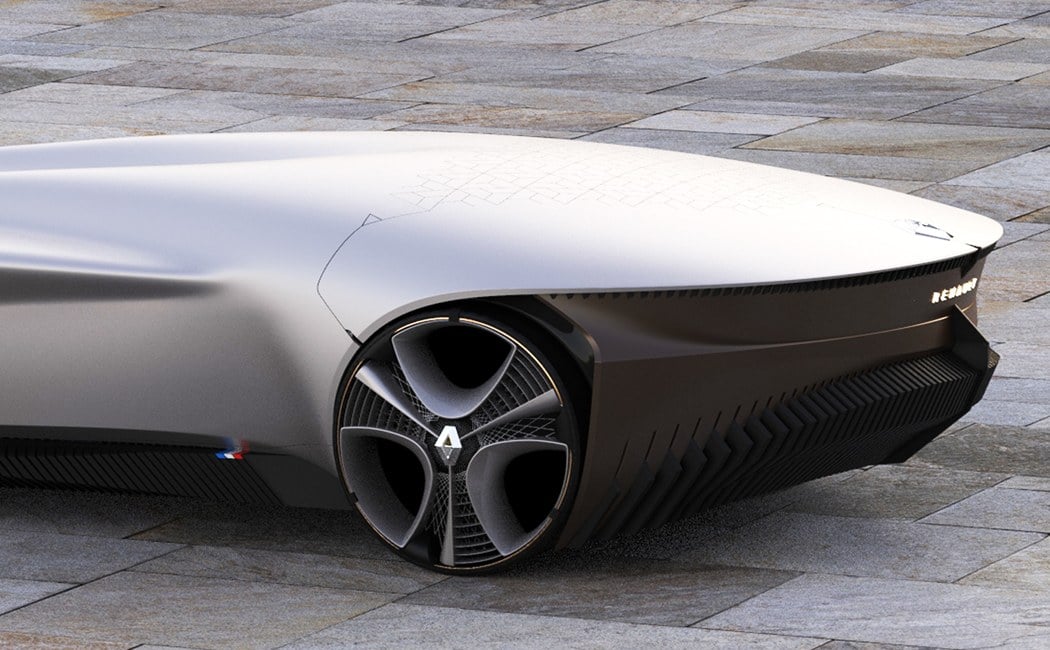 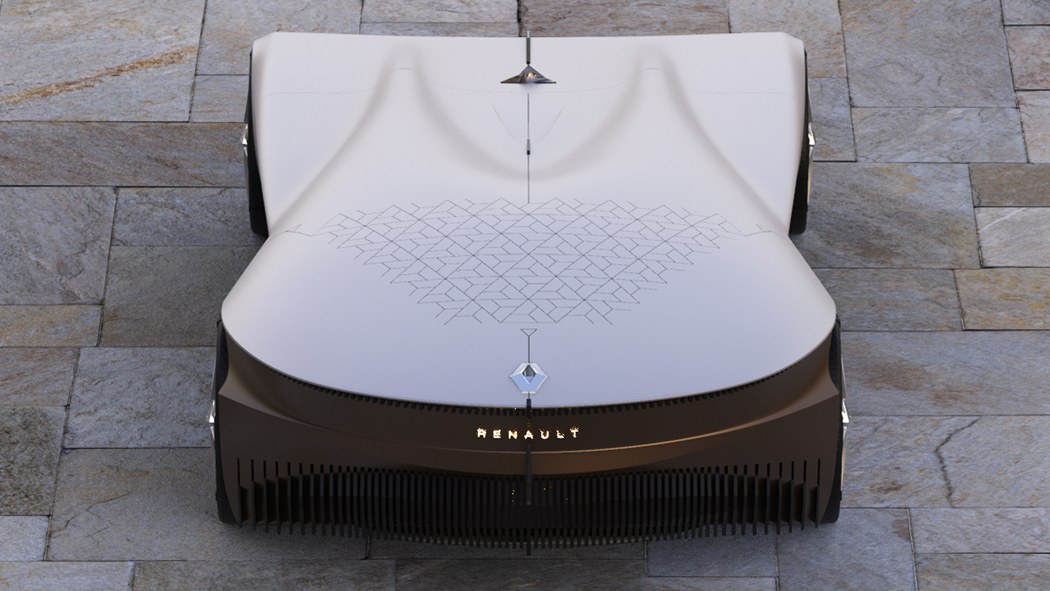 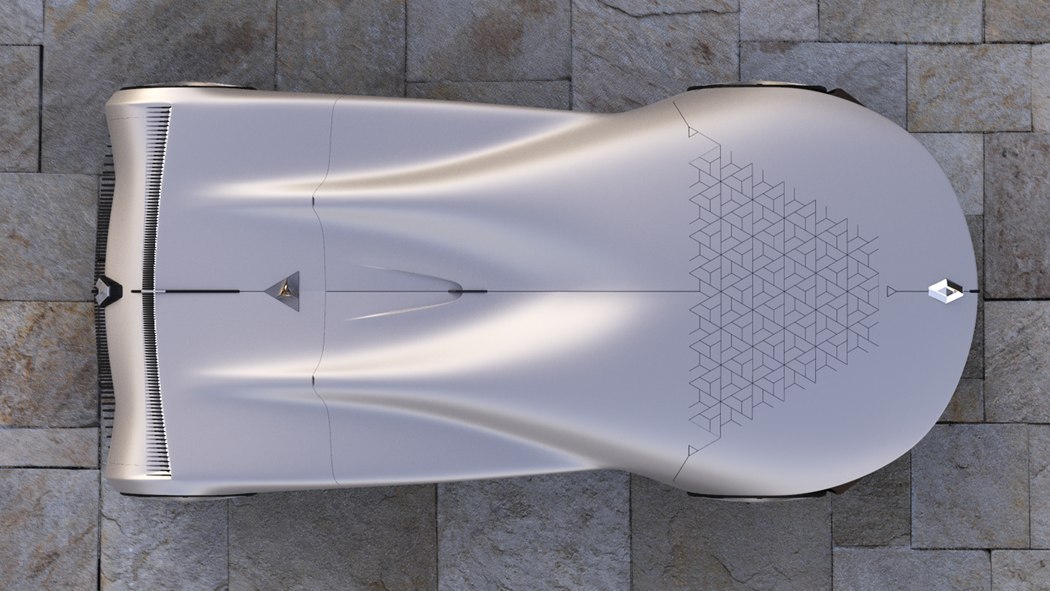 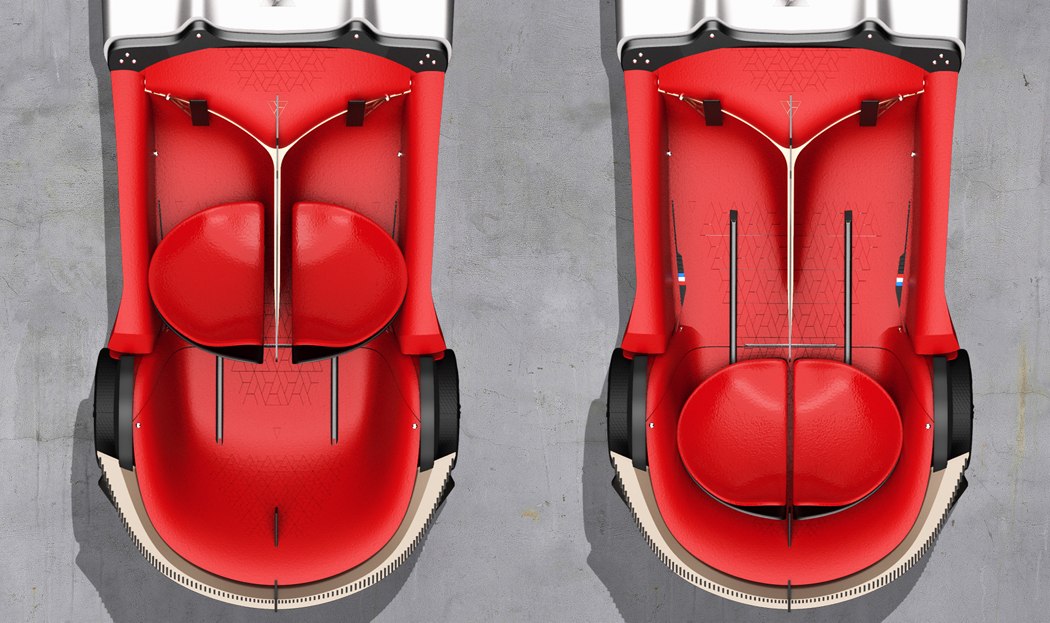 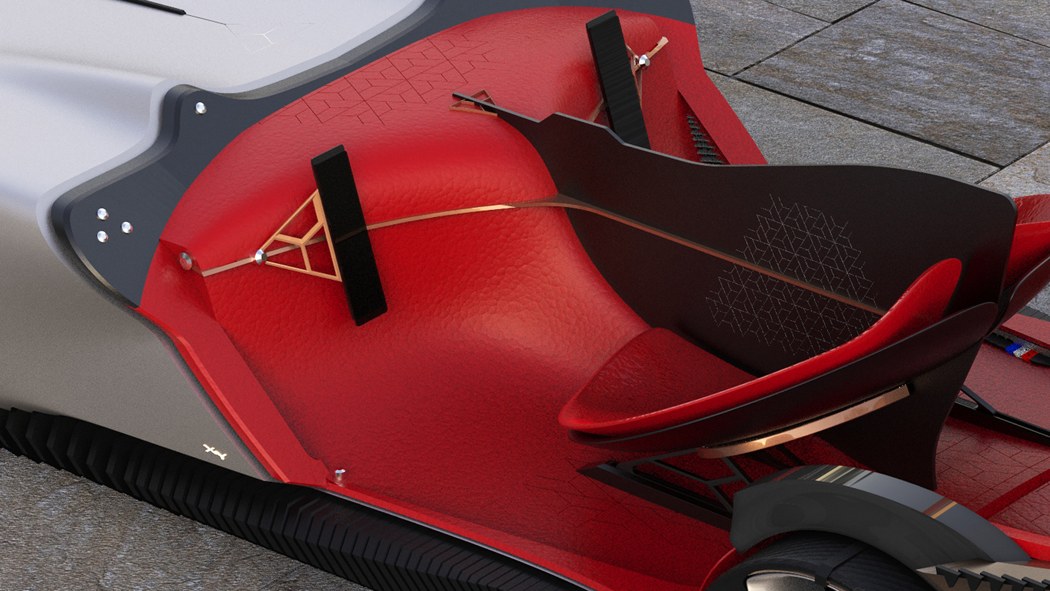 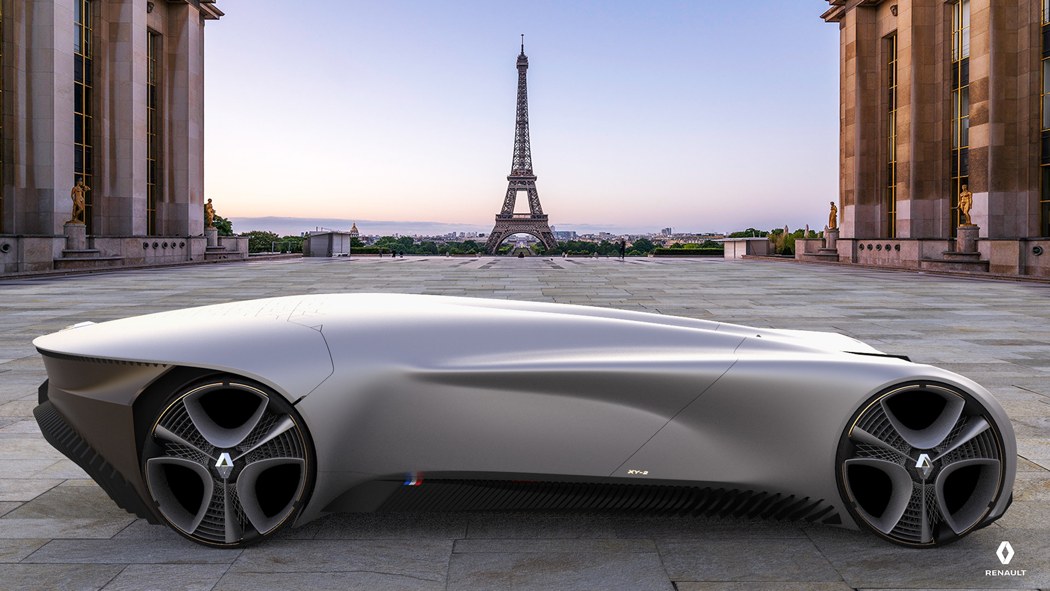 from Yanko Design http://bit.ly/2DPFFbr
via IFTTT

Tonight, step outside, look up at the sky and—assuming you’re in a location that is low on light pollution—appreciate the view of the stars. Because guys, it’s National Space Day.

iOS, Android: Stargazing is fun even when you have no idea what you’re looking at. Star Chart is a…

In honor of the holiday, Fast Company has compiled a list of all “major events in astrophysics, aerospace, and even entertainment” from now through the end of the year.

The first one up is Monday’s Eta Aquariids meteor shower, which is a cloud of debris from Halley’s Comet that we pass through each year, triggering an annual shower. The shower is already underway but is expected to peak on the morning of May 6.

(You can scour the rest of Fast Company’s list, which includes more meteor showers, a South American total solar eclipse and the 50th anniversary of the Apollo moon landing.)

National Space Day is celebrated by one and all on the first Friday in May, specifically as a way to get kids interested in math, science, technology and engineering. So if you’ve got kids, tonight would be a good night to bust out these amazing NASA websites, a few science experiments or even just some good old-fashioned glow games.

If all else fails, it’s probably no coincidence that National Space Day falls on a Friday. The only thing better than a little end-of-week stargazing is an accompanying cocktail fit for the occasion. Allow us to recommend The Cosmonaut:

from Lifehacker http://bit.ly/2WovNN0
via IFTTT

Whether you still live with mom or are a roadtrip away, Google Maps can help you get things done so you can make the most of Mother’s Day (less than two weeks away!). Here are a few helpful features in Maps to try out to make that second Sunday in May a real mom-pleaser.

Mother’s Day brunch, without the wait

Mother’s Day brunch has always been a thing. And lately, brunch every weekend has become an even bigger thing. Standing in line for hours for those delicious eggs benny you promised your mom could really put a damper on the day. With Google Maps, you can add yourself to a participating restaurant’s waitlist and get a text when your table’s ready. Instead of waiting in line, use the time instead to stroll around a nearby park and get mum caught up on your new hobbies (or maybe even your love life). If you’re more of a planner, you can always book a reservation in advance from a restaurant’s Business Profile in Maps and Search, too.

Bring out her inner kid

If you were a lucky kid, your mom probably spent a good chunk of her free time planning fun and educational outings to help your little mind expand. This Mother’s Day, show your mom how thankful you are for all of those excursions by bringing her back to the places she used to take you. Just find the aquarium, zoo, or any other place that brings back fond memories and tap the “buy tickets” button to make it happen. 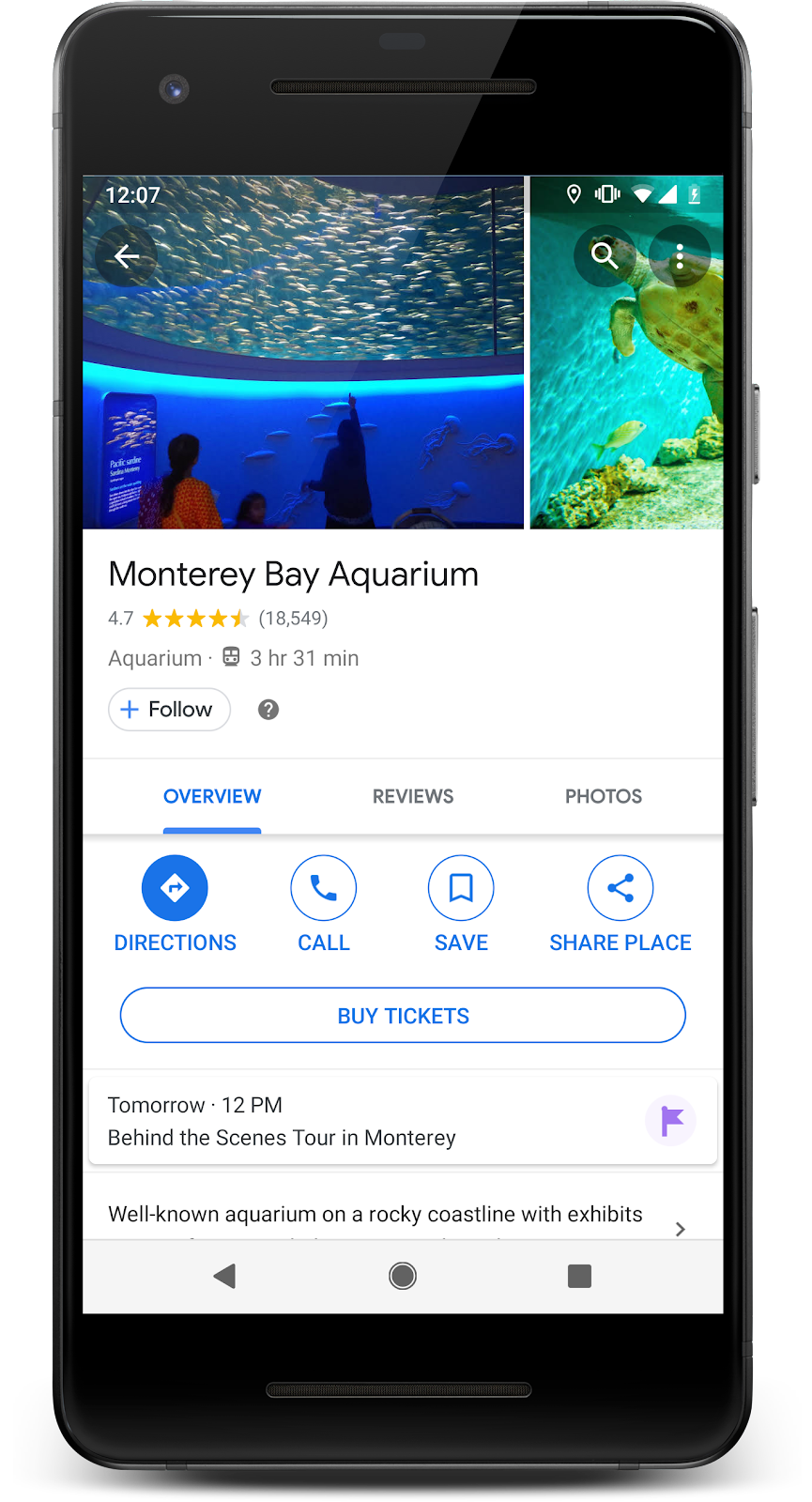 Take a walk down memory lane

If mom is the nostalgic type, you can create a list in Maps highlighting all the favorite places you’ve visited together over the years. Create a custom scavenger hunt to guide her to each place, or just visit a few of them during the day to remember all the fun you had and make new memories. Even if you don’t get to all of the spots on Mother’s Day, you can share the list with her directly from Maps, so you can pick up where you left off next time you’re together. 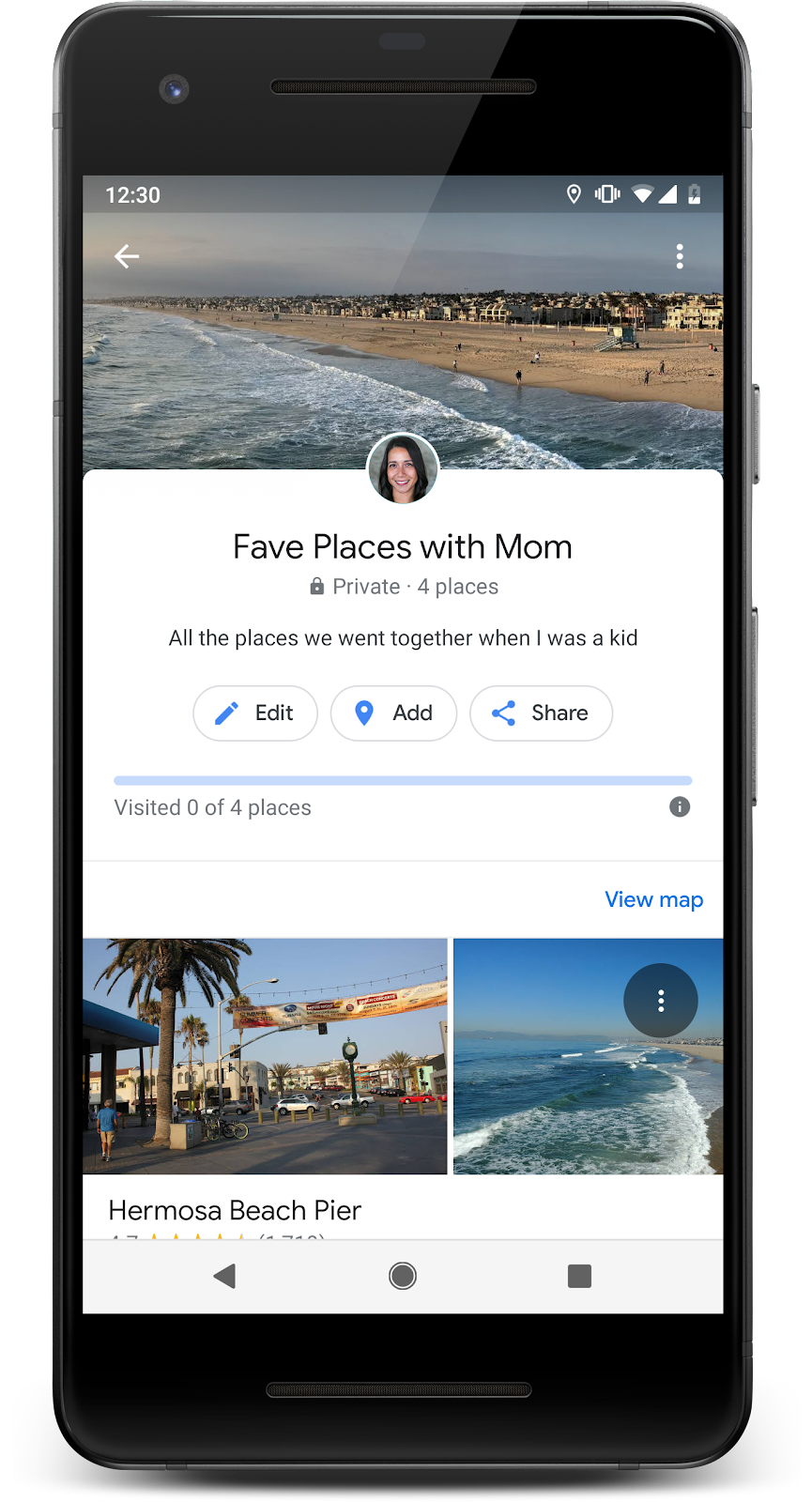 Even though Mother’s Day comes only once a year, don’t forget to add a label to mom’s address in Maps, so you can easily get real-time ETA and directions every time you head home for a visit.

Last week, the U.S. Navy presented new guidelines for collecting data on UFOs because there have been so many unexplained sightings of “unidentified aircraft” near Navy strike groups and other critical military facilities. But the Navy has announced that the new information that they collect on these UFOs will not be shared with the public.

The Navy said unidentified aircraft have entered military-designated airspace as often as multiple times per month. Some of which have been aircraft exhibiting out-of-this-world capabilities such as hovering over water without making waves and vanishing in seconds through unheard-of speeds. Sounds like a job for the SPAAAAAAAAAAACE FOOOOOOOOOORCE!

The Navy implemented the new guidelines because they wanted to encourage military members to report odd aircraft sightings and feel safe about doing so. The new rules allow people to report what they saw, no matter how unbelievable, so that they won’t be punished or thought to be mentally unstable. The guidelines are meant to destigmatize UFO sightings.

But whatever pertinent information that is provided to the Navy will not be shared with the general public. The Navy asserts that the UFO sightings are “privileged and classified,” according to The Washington Post.

Joseph Gradisher, a spokesman for the office of the deputy chief of naval operations for information warfare, said that there would be “no release of information to the general public is expected.”

“Military aviation safety organizations always retain reporting of hazards to aviation as privileged information in order to preserve the free and honest prioritization and discussion of safety among aircrew,” Gradisher said. “Furthermore, any report generated as a result of these investigations will, by necessity, include classified information on military operations.”

But if the Navy wants information, why not share their findings on the UFO and encourage the public to share their experiences? If they have nothing to hide then why is the government keeping these UFO sightings from the public? Could they please just explain this video of a UFO leaving F-18s in their alien dust?

Days before his 75th birthday, and mere weeks before the 42nd anniversary of Star Wars, one of its leading lights has gone out of the world.

Peter Mayhew, the 7-ft.-2-in. British actor whose name is forever synonymous with Chewbacca the Wookiee, died this week at the age of 74. He passed away at his home in Boyd, Texas.

The family of Peter Mayhew, with deep love and sadness, regrets to share the news that Peter has passed away. He left us the evening of April 30, 2019 with his family by his side in his North Texas home. pic.twitter.com/YZ5VLyuK0u

Mayhew was working as a hospital orderly in 1976 when an American director named George Lucas came to London looking to cast the role of Chewbacca, a 7-foot-tall hairy mashup of the Lucas family dog and Planet of the Apes, in his upcoming space fantasy film. Mayhew had only to stand up like a gentlemen to greet him before Lucas gave him the part.

Over the course of the original Star Wars trilogy, Mayhew’s quirky movement — including what his family affectionally called his “knock-kneed running” — made Chewie come alive for millions. He reprised the role, briefly, in 2005’s Revenge of the Sith. By the time The Force Awakens was announced, Mayhew was in a wheelchair in need of a knee operation — but he was determined to play Chewie one more time.

Thanks in part to donations from fans, Mayhew had the operation. He was standing in the famous Wookiee suit when Harrison Ford uttered the soon-to-be-immortal line, “Chewie, we’re home.”

Mayhew was for years the most warm-hearted and generous soul to Star Wars fans at conventions, embracing his role in our hearts with as big of a hug as you’d expect. I’ve personally asked him, and heard others ask, the same questions many times over. He never replied with anything less than a generous full-length answer. And he was a proud supporter of the stormtroopers-for-charity organization, The 501st Legion.

Fans the world over took to Twitter to share their sorrow at the news. “Peter Mayhew,” “Chewbacca” and “Chewie” dominated the trending terms, with more than 100,000 tweets just in the half-hour following the announcement.

Alas, Peter Mayhew has passed, just a few days shy of his 75th birthday. The Wookiee Roars no more. My condolences to his family, friends, and every Star Wars fan who ever dreamed of hugging Chewbacca and never letting go. pic.twitter.com/IGzlHk708z

I am so, so sad about Peter Mayhew. He brought to life one of of the most iconic characters of all time, with only his actions and eyes. And he was famously one of the kindest, warmest people. I don’t know if there’s anyone who loved Star Wars and its fans more. pic.twitter.com/pYQUkx3Rbz

Peter Mayhew helped create one of the most beloved characters in film history and did so without ever saying a word. pic.twitter.com/ttA4R3Z1Ko

Chewbacca, of course, lives on. In The Last Jedi and the upcoming Rise of Skywalker, he is played by Finnish basketball star Joonas Viljami Suotamo — who worked closely with Mayhew on The Force Awakens to mimic his style down to the furry head-tilt.

Star Wars was so lucky to find a worthy successor in Joonas Suotamo, who I think is absolutely wonderful in the role. But Suotamo always took pains to emphasize whom he’d learned from, and how kind Mayhew had been as a mentor.

Rest in peace, Peter. The Force of fandom will be with you, always.

from Mashable! http://bit.ly/2JjhsxX
via IFTTT