The HBO miniseries Chernobyl has drawn the world to remember the nightmare disaster that occurred on the early morning of April 26th 1986, when a poorly designed nuclear reactor malfunctioned during a simulated power outage safety test. The nuclear catastrophe in the Soviet Union made the area near Pripyat uninhabitable to this day and for the next 20,000 years. With the public’s attention on this decades-old nuclear calamity, there is potential for another nuclear crisis.

There is a “nuclear coffin” on the Marshall Islands that is storing radioactive fallout from nuclear weapons decades ago. However, this enclosure is starting to crack and there is alarming concern that the dome may start leaking the radioactive contaminants into the Pacific Ocean.

Between 1946 and 1958, the U.S. government conducted 67 nuclear weapon tests in the Marshall Islands including 23 on Bikini Atoll. This includes a 1954 detonation test of Bravo hydrogen bomb, which is approximately 1,000 times more powerful than the atomic bomb that leveled Hiroshima, Japan. The high-yield thermonuclear weapon was the most powerful nuclear device ever detonated by the United States and left a crater that was 1.2 miles in diameter.

In 1980, 4,000 US servicemen finished building the nuclear waste tomb that included the 18-inch thick concrete dome with 358 panels on the top in an attempt to contain the radioactive materials. However, they did not line the bottom of the dome with material that would prevent the nuclear waste from entering the aquifers and eventually leaking into the Pacific Ocean. 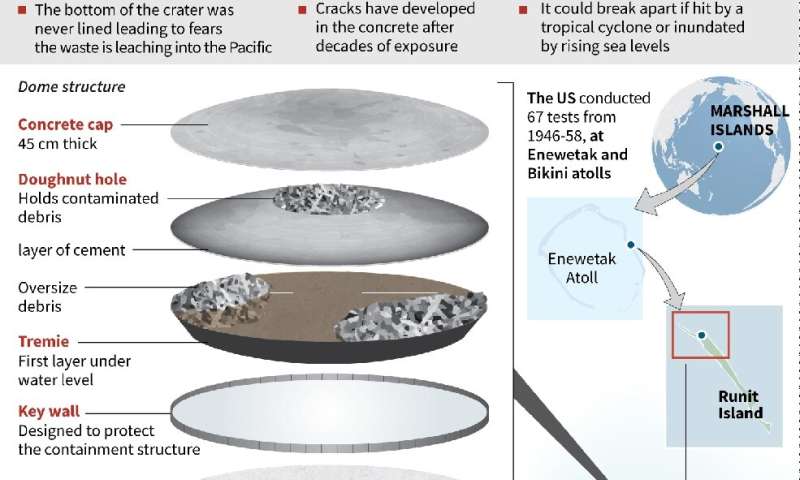 The storage facility known as the Cactus Dome or the Runit Dome was considered to be a temporary solution, yet 40 years later the dome is still there. Now there are terrifying concerns that the nuclear coffin is cracking and that the dangerous radioactive fallout could seep out into the Pacific Ocean.

In May, United Nations Secretary-General Antonio Guterres voiced his concerns that the nuclear dome could or would leak radioactive material into the Pacific Ocean.

“I’ve just been with the president of the Marshall Islands [Hilda Heine], who is very worried because there is a risk of leaking of radioactive materials that are contained in a kind of coffin in the area,” Guterres said.

With the continued erosion of the dome and island, the possibility of devastating storms or typhoons, and the threat of rising sea levels, experts believe the Cactus Dome is doomed and that means people and wildlife in the area are also in danger from exposure to the radiation.

The most concerning radioactive material inside the dome is the radioactive isotope plutonium-239, used in nuclear warheads. The frightening part about plutonium-239 is that this fissile isotope is one of the most toxic substances on the planet and it has a half-life of 24,100 years. So this problem is not going away any time soon.

Okeanos Marshall Islands visits Enewetak atoll’s Runit Island, the site where US military attempted to “clean” an estimated 73,000 m3 of radioactive debris within an 18 inch-thick concrete dome. Known locally as “The Tomb,” the dome is a haunting reminder of the nuclear legacy that hangs over Runit – which is still uninhabitable due to high levels of radioactivity. The crater that sits beside the dome like a reflection pool was created by one of the 43 bombs detonated on Enewetak atoll by the US during the Cold War era. Scientists predict that the sea level rise will cause the dome to leak into the ocean and affect the surrounding islands. Photo Creds

A post shared by OkeanosFoundationForTheSea (@okeanosfoundationforthesea) on Dec 14, 2018 at 1:13pm PST

“[The dome] is stuffed with radioactive contaminants that include plutonium-239, one of the most toxic substances known to man,” said Marshall Islands Senator Jack Ading, “The coffin is leaking its poison into the surrounding environment. And to make matters even worse, we’re told not to worry about this leakage because the radioactivity outside of the dome is at least as bad as the radioactivity inside of it.”

The United States left the area in 1986 and paid a “full settlement of all claims, past, present and future” in reference to the U.S. Nuclear Testing Program. The Nuclear Claims Tribunal estimates that the U.S. nuclear tests in the Marshall Islands caused $244 million in damages. Ironically, the U.S. government bans the export of fish and copra (dried coconut flesh used for its oil) from the area because of contaimination.

The U.S. Department of Energy released a report regarding the Runit Dome in 2013. In the report, the government argued that the soil and surrounding lagoons are already so containminated, even more so than what is inside the dome that it doesn’t matter if the containment structure leaks or not because it will not increase radiation levels.

The report states the 1977 cleanup effort only removed an estimated 0.8 percent of the total transuranic waste in the Enewetak atoll, the soil and the lagoon water surrounding the Cactus Dome. However, the more radioactive material that is allowed to seep into the Pacific Ocean, the more of a threat it is to surrounding areas. The Department of Energy report said the radioactive fallout would not affect the marine environment more than the exposure it already has been in contact with and that the nuclear waste would be diluted to safe levels once it is introduced into the Pacific Ocean.

The Republic of the Marshall Islands, which only has a population of 53,000 people and a GDP of $190 million, does not have the resources or money to fix this nuclear disaster. The nuclear coffin will stay as it has been with the hope that more nuclear waste does not spread, but Runit Island will be forsaken and abandoned like the area around Chernobyl.