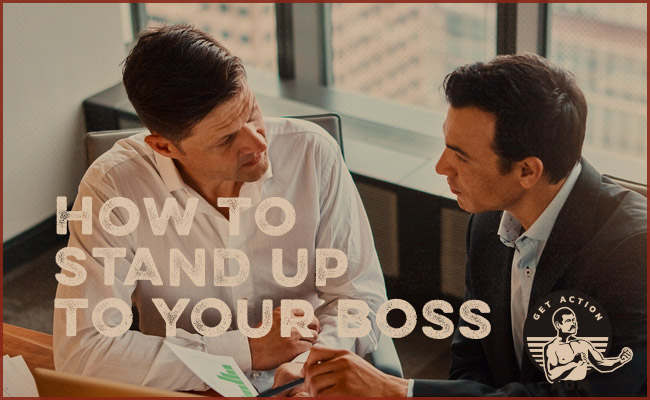 There aren’t too many places in society where clear hierarchies continue to exist — at least explicitly. But the workplace is one. Bosses are in charge, and they get to tell their employees what to do.

Ideally, and the majority of the time, there isn’t too much friction in this power dynamic. Managers and supervisors often don’t have to do too much “telling” in the first place; their subordinates know what’s expected of them, know their job, and simply do it. When bosses do have to give “orders,” they make sense given the employees’ roles and responsibilities.

Sometimes, however, bosses overstep the line, “asking” their employees to do things that seem unfair or unreasonable, or to carry out ideas for which they have serious reservations.

Maybe your manager asks you to work late or on weekends too often, gives you assignments outside your understood role, hasn’t followed through on a promise, or charges you with implementing a project you think will flop.

What should you do in these types of situations?

Try standing up to your boss.

That idea will fill many with dread, as they worry that engaging in this kind of pushback might get them canned. But it’s possible to stand up to your boss’ requests in a way that not only won’t get you fired, but has a good chance of actually enhancing the respect and communication between you.

Decide if a request is truly unreasonable or not. Before you decide to push back on something you’ve been asked to do, figure out if it’s justified and/or worth it to do so. Here are a few factors to consider in thinking that through:

If your boss asks you to do something unreasonable, in a job you’d ideally like to keep for the duration, and you have some stroke, move forward with pushing back against the request.

Set expectations early on. For reasons just mentioned, if you’re asked to do something less-than-desirable early on in a job, you generally don’t want to raise a stink since you haven’t yet earned the cred to do so; people will just wonder, “Who does this uppity noob think he is?”

Even so, it’s a good idea to hedge your response and introduce the prospect of boundaries right off the bat. So if your boss asks you to work over the weekend, you can say, “There are weekends I won’t be able to work because of family obligations, but I can work this weekend.” Or, “Even though I don’t think my skill set is best suited to this kind of project, I can definitely take care of it this time.”

Then do the kind of quality, committed work that will increase your profile and value, and allow you to later erect the boundaries to which you’ve already alluded.

Schedule a meeting to talk about your issue. Let’s say your boss didn’t get the hint, and he keeps on making unreasonable requests of you. Once you’ve reached your personal “breaking point,” it’s time to talk to him or her. But don’t try to corner them in the hallway, and definitely don’t raise the issue during a team meeting; if there’s one thing bosses hate, it’s someone questioning their authority in front of other people. In a time of increasing social anxiety, you might also be tempted to broach the subject via email; if at all possible, don’t. It takes up more time, shows a lack of confidence, and compounds misunderstandings.

Instead, ask your supervisor if you can schedule a face-to-face meeting to talk to them. A one-on-one meeting will be less threatening, and allow your boss to give you their full attention. Simply say something like, “I was wondering if you had time today/this week for a quick meeting; I just had a few questions about your recent request/the new project.”

Go in calm. Having an angry demeanor, even one you’re doing your darndest to hide, will set off your boss’s flight-or-fight feelings and create defensiveness. Act completely calm and level-headed; aim for assertiveness — the mean between aggressiveness and passivity.

Ask for more information. At the heart of many conflicts between bosses and employees (and everyone else too!), is the assumption each person makes that they know everything about the other person’s side of things (and that their own side is objectively right). But there are always pieces missing in one’s understanding of another. So instead of going into your boss’ office to argue or prove a point, decide that you’re going to, as the authors of Difficult Conversations put it, explore each other’s stories. Make it a two-way discussion where you both get to share what you’re worried about and where you’re coming from.

Figure out possible gaps in your understanding of your manager’s perspective. You might say, “I’ve been wondering why I’ve been asked to work so much overtime lately, which hasn’t typically been the case,” and hear back, “Well, the truth is that a hiring freeze has been put in place until the new budget is worked out, which has left us short staffed. I’m sorry about that, but hope you can bear with it just a bit longer.” Or you may say, “I’ve been surprised by the number of drafts you’ve wanted on this document; it feels like you don’t trust my work on it,” and hear back, “I can understand that. But my own manager felt blindsided by the final proposal given to this client last time, and wants to know where we are in every phase of the project. If we don’t secure this account, we won’t make a profit in Q4.”

If there’s some idea you’re tasked with implementing that you’re unsure about, Difficult Conversations suggests saying something like:

I would very much like this initiative to succeed but don’t yet feel confident in my ability to pull it off. Specifically, it would help to spell out how we might answer a couple of the objections I can imagine coming our way. For example . . .

If you begin a line of dialogue like this, three things may happen:

“My wife has been working the night shift lately, so when I have to work nights too, we have to find a sitter for the kids.” “When I took this job, my understanding was that I’d be working on X kind of projects rather than Y.” “After the Z department got cut in half, I started getting the reports on Fridays instead of Tuesdays, which makes it hard for me to get my analysis to you by Monday morning.”

It’s easy to assume that your boss knows why something is important to you, but he may not; your problem looms extremely large because it’s your one big issue, but he may be juggling a dozen employees’ problems, as well as his own.

Frame your remarks in a way that affirms your boss’s status. Work with human psychology rather than against it. Humans are viscerally very, very protective of their status. So broach your issue with your boss in a way that acknowledges, rather than seems to override, his authority. The authors of Difficult Conversations give this example:

I know there are lots of factors you have to take into consideration, and at the end of the day, I’m onboard with whatever you decide. I just want to make sure that as you think about it, you are aware that . . .

Connect your concern to the boss’s benefit. To really change your boss’s mind about something, don’t center your concern on how their policy or request is affecting you personally, but instead connect it primarily to how it’s affecting their immediate or long-term bottom line. “When you check up on my work frequently, it’s harder for me to get into a productive flow, and the final product becomes less cohesive than it could be.” “I would really like to stay in this job for a long time, but the long hours are starting to make me feel burnt out.” “The current deadlines require me to rush to get the graphics done, making it harder to catch errors before they’re posted online.”

Offer concrete solutions — as a request. Go into your discussion with your boss with specific solutions to your concern. Make sure these solutions are apt to be mutually agreeable, and offer them in the form of a request. “I understand that extra hours need to be worked to get this project done on time. But would it be possible for me to work those overtime hours from home instead of the office?” “It would be more manageable for me to get you the reports on Tuesday instead of Monday. Would pushing the deadline back be possible on your end?” “Tim says he’s willing to work for me on Saturday. Is it okay if we swap shifts?”

Decide what to do if you can’t agree on a solution. If you and your boss can’t find a mutually agreeable option, you have to decide on what action to take next, based on your choices and alternatives: You can talk to HR. If the problem is affecting other employees, you can band together and address your boss as a group. If you need to keep the job at any cost, you can simply soldier on.

If you’re aren’t worried about keeping the job, then you can refuse to stand down and accept the consequences. Even if you go this route, the authors of Difficult Conversations argue that you should “explain why you are walking away. What interests and concerns are not met by the solutions you’ve been discussing?” They give a hypothetical scenario where an employee, Henry, has been asked by his boss, Rosario, to work the weekend, even though he made plans with friends, and gave her advance notice that he wouldn’t be available. After a discussion where Rosario rejected Henry’s proposed solutions to the dilemma, Henry still decides to take the weekend off. Nonetheless:

Rather than just storming out, Henry should be clear about his feelings, interests, and choices. He might say, ‘Rosario, I really am sorry. I want very much to be a good employee, and to help out when I can. Normally, I’m happy to work weekends and nights – I hope you’ve seen that in the past. It’s simply a matter of notice. I feel badly about leaving you in the lurch; at the same time, these plans are really important to me, and I gave you plenty of notice and worked hard all week so that I could go away. So I don’t like the choice, but given the choice, I’m going to go.

There’s no need to burn bridges if you don’t have to. Henry might get fired, but “as often as not, he may return to find Rosario is both unhappy and more respecting of him and his time.”

Bosses often already know when they’ve pushed past a line, and may apologize and change their approach once you’ve respectfully stood up to them.

If they don’t, you may need to be thinking about how long you want to work under them, and start making plans to find a new job.

The post How to Stand Up to Your Boss appeared first on The Art of Manliness.

from The Art of Manliness http://bit.ly/30tvfXT
via IFTTT